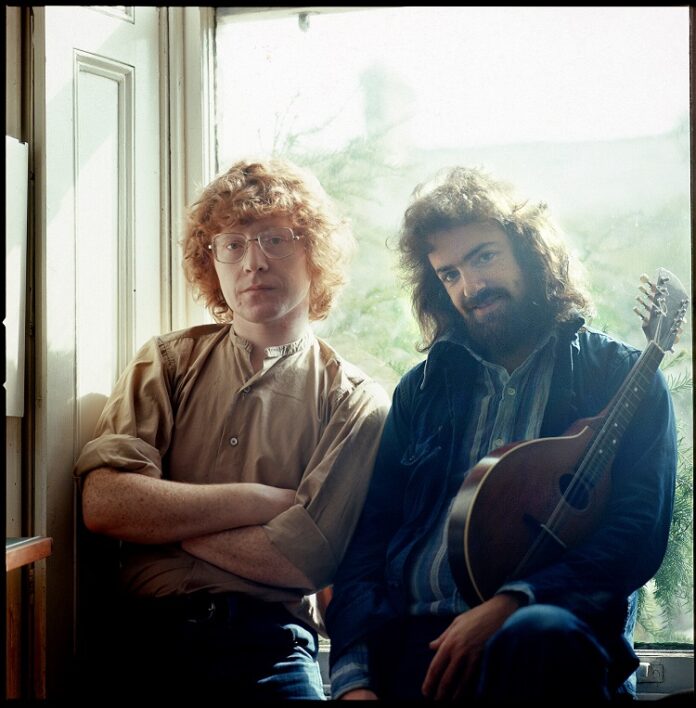 It`s nearly half a century since the release of this self-titled classic from two stalwarts of Irish folk music and a Special edition release has to be welcomed. This album came together at Rockfield studios near Monmouth in Wales between June and September of 1976 after both Andy Irvine and Paul Brady had left Planxty. They were joined by bouzouki player Dónal Lunny and fiddler Kevin Burke, whose own group, The Bothy Band, also happened to be there recording their album `Old Hag You Have Killed Me`.

The album opens with `Plains of Kildare` with Irvine leading the singing, a number written about a horse named Skewball, who was foaled in 1741 and whose most famous race was on the plains of Kildare. Kildare to the West of Ireland`s capital Dublin still has two famous race courses today in The Curragh and Punchestown. If you close your eyes you can almost feel the horse racing along as this number progresses with guitar, bouzouki, mandolin, and fiddle complimenting each other. We have what is an Ulster love song in `Lough Erne Shore` which has a quite haunting hurdy-gurdy accompaniment throughout. It`s a song That Paul Brady learnt from Paddy Tunney who was known as the Man of Songs. A tale of meeting a maiden at the shores of the lake and trying to coax her to become your wife.

`Fred Finn’s Reel / Sailing Into Walpole’s Marsh` are a couple of reels that blend / bleed into each other with a tapped bodhrán, mandolin, fiddle and bouzouki all joining to provide a number that will almost certainly have you tapping your foot to. We have an interpretation of “Bonny Woodha'” by Andy Irvine in `Bonny Woodhall`. It`s a tale of the narrator leaving his lover Annie as he is a soldier and has been called away. His regiment goes into battle and he is wounded. He says he would recover better if Annie were there and regrets leaving the collier’s trade. The vocal delivery with a poignant tin whistle joining would draw a tear from a stone.

I have to admit `Arthur McBride And The Sergeant` is one of my all-time favourite songs, which I always regard as the best Christmas song ever written as the story takes place on Christmas morning. It`s an anti-recruiting / anti-war song about a meeting of two cousins with a Sergeant, his Corporal, and his drummer boy during a walk. The Sergeant attempts to recruit the cousins without success before things turn quite nasty as the soldier`s offer is declined. It was where I first learned that the drummer boy`s instrument was a `rowdeydowdow`. There is a film interpretation made of the song from 1977 by Tiernan McBride and I encourage you to seek it out and watch it. The Ulster lilt in Paul Brady`s voice on this timeless classic is a joy to behold. We have a distinctly different outcome in the telling of `The Jolly Soldier / The Blarney Pilgrim` which was based on an old ballad called `Earl Brand`. The tale morphs into a jig in the later part and it`s a delightfully dreamy kind of whimsical composition which The Chieftains were so adapt at delivering.

`Autumn Gold` is exuberant although it has a slight melancholic touch. It brings to mind the delightful season where the cold is starting to kick in, the days are growing shorter and leaves are falling from the trees but on certain days when the sunlight falls just right, it`s heavenly. Andy Irvine wrote this ballad while in Ljubljana, Slovenia and it became the final song of a quartet written during his time there. His vocal delivery has an almost magical introspective contemplation on lived experiences. Another tale of a soldier going off to war follows with `Mary And The Soldier` which has significant relevance considering what is currently occurring in Ukraine.

`The Streets Of Derry` is in essence a love story, which could well be turned into a Hollywood blockbuster in its plot line. Another mesmerisingly charming submission. This release closes with `Martinmas Time / The Little Stack Of Wheat`. The former sung by Irvine, an amusing tale of deception which has flute tinges throughout and some sweet almost Sean-nós harmonies at the beginning of the piece. It kind of syncs from the former into the later which has fiddle and mandolin complimenting each other on this hornpipe or dance composition.

Well, this re-release of Andy Irvine and Paul Brady self-titled album is stunning and it’s incredible to think that this was released nearly fifty years ago, it must have been so innovative for that time. I was a teenager in 1976 and was coming through a reggae / metal awakening and if somebody had given me this album at the time, I’d be embarrassed and horrified as to what my reaction would have been. But time and maturity shapes you and this to me is the benchmark for that genre of Irish folk fusion. I saw Paul Brady only a few weeks ago as part of The Transatlantic Sessions and Andy Irvine, god willing, is due to visit my hometown later this year which is a testament to their standing and legacy.

Buy, beg, borrow, or steal this album, it`s a must for anybody who claims to be a musical  enthusiast.