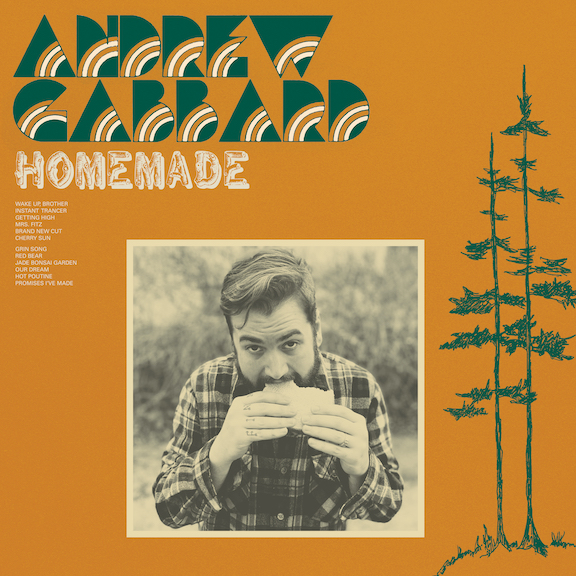 Andrew Gabbard releases his debut solo album `Homemade` this month. Andrew was formerly of Buffalo Killers and Thee Shams and is currently in the Gabbard Brothers, as well as The Black Keys’ touring guitarist.

The album opens with `Wake Up, Brother` a quite introspective and reflective melancholic number that focusses on what matters in the wake of the current pandemic. It`s a piano led piece with a line that really sums the situation up with “Here we are 2021, kiss the one you love if they’re still here”. There`s a much more upbeat offering with `Instant Trancer` an undemanding but delightfully melodic track with some captivating vocal harmonies.

`Getting High` almost celebrates the positive aspects of not getting high and has some enthralling lap steel tinges throughout but I have to say that the singer almost sounded stoned to me as he related this tale.  There`s a charming homage to a beloved teacher passing away with `Mrs. Fitz` which sounded very Beatlesque and hinted at `Lucy In The Sky With Diamonds`.

`Brand New Cut` has a kind of Beach Boys vibe about it, dreamy and delightful while to me `Cherry Sun` had an almost Byrds like texture, there was almost a retro touch to it.

`Grin Song` will put a smile on your face and it`s a number that could sit easily on Brian Wilson`s epic `Pet Sounds`. The drumming on `Red Bear` is almost tribal and fits wonderfully well as it`s a song that`s written about the shameful treatment of Indigenous people in the United States. It`s shared quite subtly and not in a preachy manner which to me allows it much more of an impact.

`Jade Bonsai Garden` has a jaunty almost throwaway style about it but is still an enjoyable listen. There`s a sort of musical interlude at the midway point that had me kind of delightfully drifting off.

I have to say I loved `Our Dream` maybe it was it`s positive message, I don`t know but something really crystallised with me on this submission.

`Hot Poutine` has a really psychedelic feel to it and I had to google what poutine was to discover it`s a dish of French fries and cheese curds topped with a brown gravy, so make of that what you will. The album closes out with a cover of `Promises I’ve Made` written by the late Emitt Rhodes, who was once dubbed “the one-man Beatles” back in the early ‘70s. I have to admit I’d never heard of this artist but had a quick listen to the track before turning to Andrew`s own take. It`s a really faithful version and does have that Fab Four feel.

It took a few listens before “Homemade” really started top make sense. There are obvious influences such as The Beatles, The Beach Boys, CSNY, Wilco, and The Flaming Lips but to me that`s what really drives this release. This album is a blend of dreamy pop which will have you dipping in and out of as an when the mood takes you.