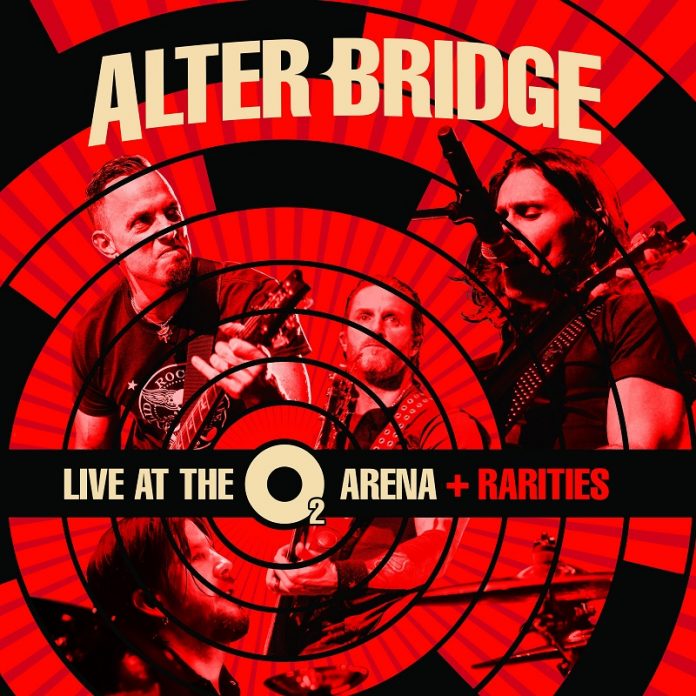 Damian’s been busy. Here he is with another one as Alter Bridge stick a live one out

In my opinion Myles Kennedy has the best voice in rock, so I was delighted to be able to review Alter Bridge`s latest offering, a new live album and rarities collection. The album was recorded at one of the biggest moments of the band’s career, the monumental show at London’s famous O2 Arena on November 24th, 2016. The live album is spread over two discs and accompanied by a third exclusive disc release of rarities.

“The Writing on The Wall” kicks us off, a real thumper to get the audience going and to warm up Myles`s voice. “Come to Life” quickly follows before what is probably my favourite track “Addicted To Pain.” A stunner on record and wonderfully reproduced live. The anthemic “Ghost Of Days Gone By” has Kennedy leading and encouraging the faithful to sing along. Again “Cry Of Achilles” benefits from audience participation before we get almost a duel between Myles`s vocals and Mark Tremonti`s guitar, stunning. “The Other Side” is a mid-paced burner and gives the crowd a chance to catch their breath.

The heavy “Farther Than The Sun” allows Brian Marshall on bass and Scott Phillips on drums to really shine and show off their musical ability. Another track I must admit to loving is “Ties That Blind”, the music and vocals soar up and down as the melody changes direction throughout. Wonderful.

Mark Tremonti takes over vocal duties for “Water Rising” adding a further dimension to the band.

“Crows On A Wire” gets us back on track before a solo acoustic version of “Watch Over You” wraps up the first disc.

“Isolation” kicks off the next disc, a cracker of a tune to get the faithful going. A track that is probably the band`s signature anthem follows next with the superb “Blackbird,” then it`s band introduction time and the in your face “Metalingus” a song that gives the boys the opportunity to highlight their musical talents.

I must admit I really love “Open Your Eyes” it has everything for me, great lyrics, great vocals and great melodies and it`s perfectly executed here with the audience singing along. Show Me A Leader”, “Rise Today” and “Poison In Your Veins” quickly follow before “My Champion” closes out the show and the disc.

The additional disc of `Rarities’ commences with “Breathe” recorded around the time of the ‘One Day Remains’ sessions and has only ever been available as a US retail exclusive via Best Buy. An excellent track that I’m surprised doesn`t form part of the live set as I’m sure it`d be well received.

Two more never-before released tracks “Cruel Sun” and “Solace” follow, that were recorded during the ‘One Day Remains’ sessions in 2004. “Cruel Sun” provides a solid platform for Myles to demonstrate the dexterity of his vocal range. “Solace” starts off quite mellow but is really filled out with some wonderful guitar licks. A real grower of a song.

The remaining tracks have only been released in Japan until this collection. The first of them being “New Way To Live” which has a real ethereal beginning before becoming a rockier outing.

“Damage Done” and “We Don’t Care At All” are straight out rock songs, which have great bass and guitar lines. “Zero” is up next and is a more intricate and involved tune, the music is more elaborate and we get some stunning vocals. In “Home” we get a more anthemic outing

The final three tracks are wonderful metal excursions “Never Born To Follow” with some diverse harmonies, the thumping “Never Say Die (Outright)” and “Symphony Of Agony (The Last of Our Kind)”

An impressive trio of songs to close out this disc.

This release has something for everybody. The live show highlights where the band are at present, a band really on top of their game. Listening to the live outing, you can understand why they have managed to sell out two nights at London’s Royal Albert Hall, this coming October in under 7 minutes. The additional disc of rarities will please fans with songs previously unreleased and some others more difficult to obtain.