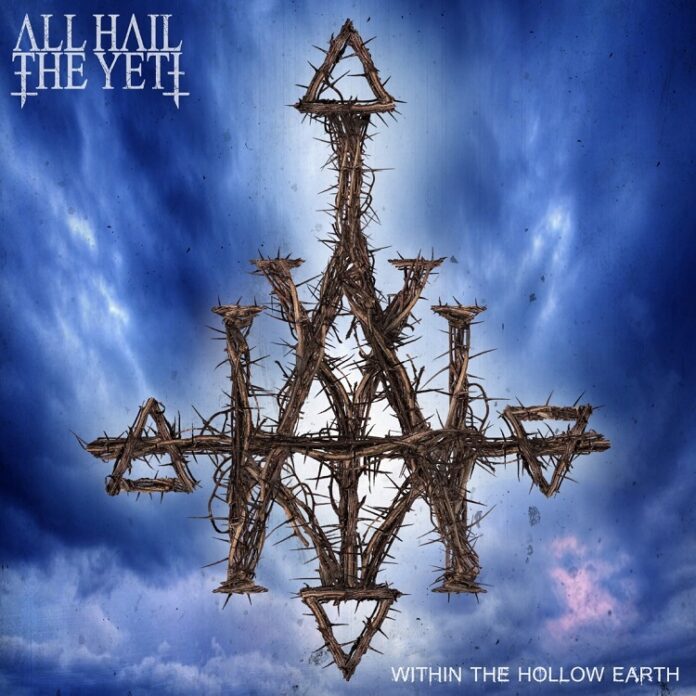 When does an EP end and an album begin? “’Within The Hollow Earth” is -according to the playlist I made on Spotify with the MP3’s – 28 minutes 1 second long, that makes it precisely 54 seconds shorter than “Reign In Blood”, and its seven songs in duration. You work it out.

All Hail The Yeti are an interesting bunch.

The problem with that word is its usually used for records that are basically unlistenable, so that critics can try and show how much more than us they know about music (“oh the new Captain Beefheart album is interesting…..” that type of thing) but its actually true when it comes to AHTY.

There’s the fact that they do heavy, almost modern metalcore stuff, but their choruses, their hooks, they are so southern they are soaked in barbecue sauce almost, their lead guitar is arena ready, but that’s not it either. Not really.

Their lyrics are macabre one minute, and like some violent version of Lord Of The Rings next, and it all adds up to something that I, usually, don’t care for much. I don’t do modern metal, I don’t do Game Of Thrones and the ilk, and I damn sure don’t do macabre.

And yet, there’s something about All Hail The Yeti that I can’t resist.

When I reviewed their “Highway Crosses” record back in 2018, I wrote: “Bands [like] All Hail The Yeti don’t come along often, and theirs is a brutal, often unwelcoming, yet superb, world.” And that’s true still, just on “…Earth” it seems, they’ve ramped everything up a notch or two.

Take the mighty slab of an opener “Bury Your Memory”, the riffs, the violence of the words, and the sheer desolation of the chorus “when we die, we die alone”, marks that one out as special.

Taken as a pure record with nothing else in tow, then this would still be superb, but add in the originality of the sound and what you have is something that is one of those rare things: something that can cross over.

The closest thing I can think of is perhaps Mastodon, and there are flavours of Brent Hinds and the chaps on “Headless Valley”, but given that its set in a remote valley in Canada rich in folklore and the type of nightmarish visions that usually give MV the heebee jeebies, we’ll probably not explore.

Whatever else this is, it will still get you in the moshpit. “Funeral Heart” does thrash, but not like Machine Head. The hook “couldn’t wait to see you go, you’re a demon with a heart so cold” is laden with foreboding.

They have a great ability, do AHTY, to see things with both great clarity and descend into a maelstrom of chaos all at once. The defence would like to include “Nidavelir” as evidence, it grooves along, its got a huge chorus, then from out of nowhere takes on a nightmarish form.

In fact, its quite a feat that they’ve managed to make what is so fundamentally inaccessible as this quite so much fun. “Cold Dead Leaves” literally sees the protagonist in hell, but still manages to chuck in the type of solo from Dave Vanderlinde that Slash would trade his top hat for.

At times it even seems there are two or three songs jostling for supremacy all at once, that’s the case, for sure on “Cry of the Waheela.” And if the last one, “The Great Dying” is more Lamb Of God than the others, in just over three minutes it leaves no one alive – and salts the earth for good measure.

I’ve listened to this a lot over the last week or two – more than I would usually listen to a record for review – because it’s not my usual ballpark, but then maybe it is. There’s nothing better, after all, than a band that pushes the boundaries and finds some place that no one else does. That’s All Hail The Yeti and that’s definitely “Within The Hollow Earth”. Modern metal done right.