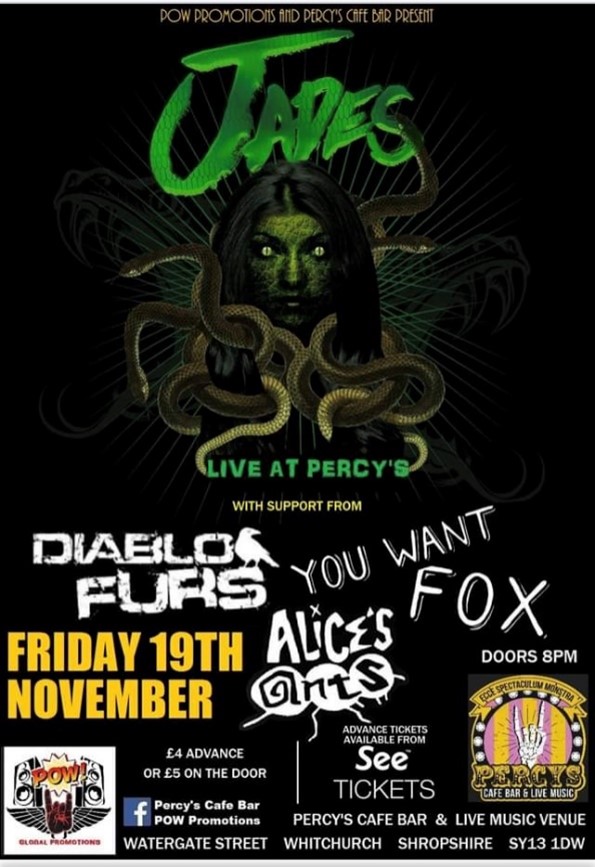 I must admit I think this place is a hidden gem and should be an example to other venues for their commitment to live music and putting on some great bands.

Tonight is a bit of a Nottingham take over, although interestingly the main band hail from Paris, France.

First up are Alice’s Ants who are by their own reckoning are a garage, grunge-alt band from Nottinghamshire. The influences such as Green Day, Nirvana, and Hole are evident, but to me they have their own sound and are a cross between old and new punk and grunge bands with elements of early No Doubt, L7, Hole and sometimes even have Libertines type riffs which all makes for an interesting mix. Alice has a great voice, and the band are tight and have commitment. They play a great set and are doing some good supports so will clearly be destined for much bigger things.

I must say both myself and my mates really enjoyed this band – they have brilliant rapport with each other and the audience, great musicianship, catchy songs and quick comic talent that keeps the audience hooked. The singer joking that she shouldn’t have eaten the kebab so close to going on stage which along with other anecdotes was refreshing to see.

Touted as a female answer to Royal Blood they get an excellent sound for a two piece and the vocals really complement each other and push out the songs. The songs are well crafted despite Natalie saying she didn’t like playing one of them. Bad Girls and My Ex-Boyfriend were excellent tracks, the latter engaging the audience. They have released two albums already and when played well it’s amazing the noise two people can make. I look forward to seeing them again.

I have seen Diablo Furs a few times at gigs in the Black Country and I also caught their 2018 Rebellion set which presumably prompted their return the following year. The band is Rob (guitar & vocals) Suze (vocals). Kay (Keys & Synth), Becks (Drums) and Danii (Bass & Backing Vocals). Rob and his young band can craft a tune and their songs you will find yourself humming a few days later. They have all the best influences of 70s punk, 1970s New York Punk such as the New York Dolls might do, mixed with pop and glam.

From excellent opener Chase the Beat, the mix of glam punk guitars, vocal harmonies, pounding drum rhythms, strumming and melodic bass and the use of synth lines throughout made it an excellent show. They look like a band, play with conviction and really put on a show, bouncing around the stage, with the bass player sometimes rolling around the floor.

‘The Pressure Don’t Stop’ is a classic singalong and the choruses are so catch many of the audience either knew them already or couldn’t resist singing along. No doubt many purchased the album as I did soon after Rob had climbed down from the bass drum following the crescendo at the end of closer Meteors.

Apparently, they don’t do setlists which amazed me given this polished performance. But as far as I know it went a bit like this:

The album is brilliant as was the show. Check them out.

My friend said this is his new favourite bass player.

Unlike tonight’s other bands, Jades are not from Nottingham and are from Paris, France on part of a short UK tour. They are pure classic rock and obviously in tune with their genre. They have a great look, excellent lead vocals, twin guitar licks, intricate bass lines, harmony vocals and drumming that is perfect for every song. Like a young Girlschool, they wouldn’t be out of place at any of the rock festivals around the UK.

They played some great anthemic rocks tunes engaging the audience as they worked their way through their songs such as Be My Freak and songs from their 2018 six-track EP, Misnake.

Their set was a great end to the night and I hope they had a good journey home and hopefully sampled the local cuisine so well marketed by You Want Fox earlier in the evening.