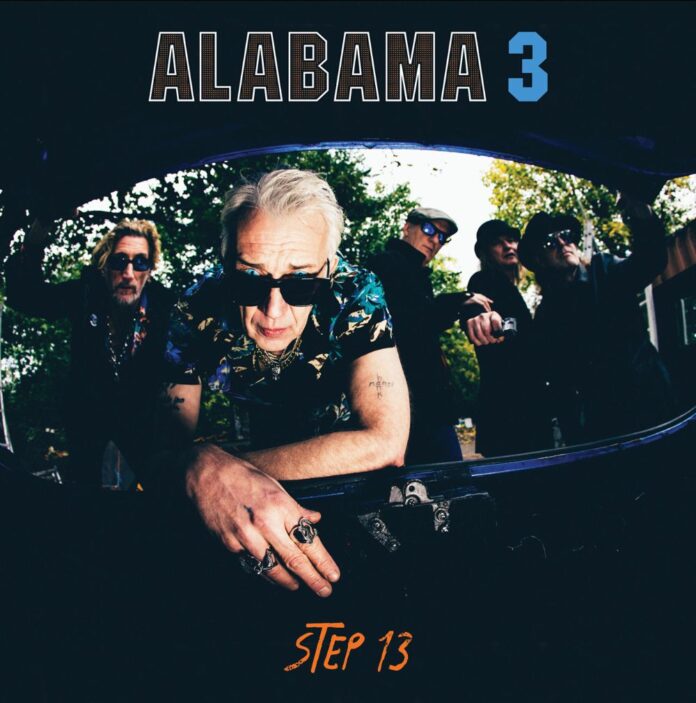 Whenever I mention Alabama 3 to friends they stare at me blankly until I say you know the opening tune “Woke Up This Morning” from The Sopranos and they have that lightbulb moment then I say that`s them. As songs go, this kind of trip hop, electronica acid jazz anthem is no better a tune to give anybody a flavour of this legendary band who were formed in Brixton, London in 1995. I`ve only seen them once at the Phoenix Festival in Long Marston, Stratford-Upon-Avon the following year but you could tell then they had something. The band were formed when Rob Spragg met Jake Black at a party and the rest, they say is history. The devastating news in May 2019 of the passing of Jake Black, aka The Very Reverend D. Wayne Love would have finished a lot of bands, but it has unified this outfit and they release their thirteenth album `Step 13` this month as much in tribute to their fallen friend. This album is Alabama 3’s thirteenth studio outing. The title, ‘Step 13’, is from L Ron Hubbard, the Scientologist, referring to the next phase after death and also a colloquial term for when an AA 12-Step old-timer hits on a group newcomer with less than a year of sobriety.

The album opens with `Whacked` and it`s a wonderfully uplifting funky almost retro disco dance track with a chorus of “Everybody’s getting whacked on something, Something that makes them feel good” that`ll have you singing it for the rest of the day. We have a much more bluesy trippy affair with `Yolanda` which was written in summer last year following the riots across the USA in response to George Floyd’s murder in Minneapolis. I loved the occasional harmonica blast as we were swept along on this intoxicating journey.

‘The Lord Stepped In (Taking Back Control) `is a parody of the USA`s ex-President Trump, a fast paced toe tapper which has some cracking guitar riffs along route. I`m not sure how to describe `Petronella Says’ apart from it being a sort of high speed head rush of sorts.

`Rise Up Brother Rise` is a soulful electronic tinged dance track that is a reflection on the climate crisis we are experiencing. We enjoy a stunning orchestral tinged introduction to ‘Tranquilize Yourself Britannia’ a spoken word reflection on the opioid epidemic put to a dreamy trippy backdrop.

`If They Ring Your Bell` takes us on an uneasy slightly off kilter jaunt through the netherworld of crack dealers while `Everytime I See A River` seems a much more introspective reflective musing with an almost country tinge.

‘Night Tripper In The Trap House’ is a gospel tinged slow burn and if i`m honest I felt I was intruding as the very last moments of Jake’s life are documented via what Rob calls the “symphony” of bleeping life-support machines, recorded at his hospital bedside, gradually switching themselves off as Black breathed his last. The bands own distinctive tribute to the NHS comes with the heartfelt `Somebody Somewhere` which has the resonating line “somebody somewhere still cares”, which sums up what most of us believe, in just four succinct words.

`Lifted` to me was one of the highlights of this release. It begins wonderfully stripped back with a tinkled piano, vocal and harmonies. Along route we have synth swathes and dreamy guitar riffs but it`s the gravitas of the vocal that really shines here. A lonely lap steel guitar runs through `They Shoot Horses` along with the rhythmic sound of a hand tapped conga drum or similar. A strange submission that`s a little difficult to pigeonhole, a bit jazzy, a bit country but totally captivating.

We close out with `Song For Aubrey` a gentle country tinged lyrical outpouring. An odd but quite engrossing number to conclude on.

I have to admit I wasn`t too sure as to what to expect from the surviving crew of Alabama 3 but there was so much to take from this album and it`s a wonderful tribute to the band`s departed friend and colleague and also a testament to the remaining band members. The album is a continuation of all the wonderful music that the band are renowned for with its soulful, trippy, techno country tinged blues wrapped up with social commentary with a political bite. The band take this release on the road next spring, miss them at your peril.