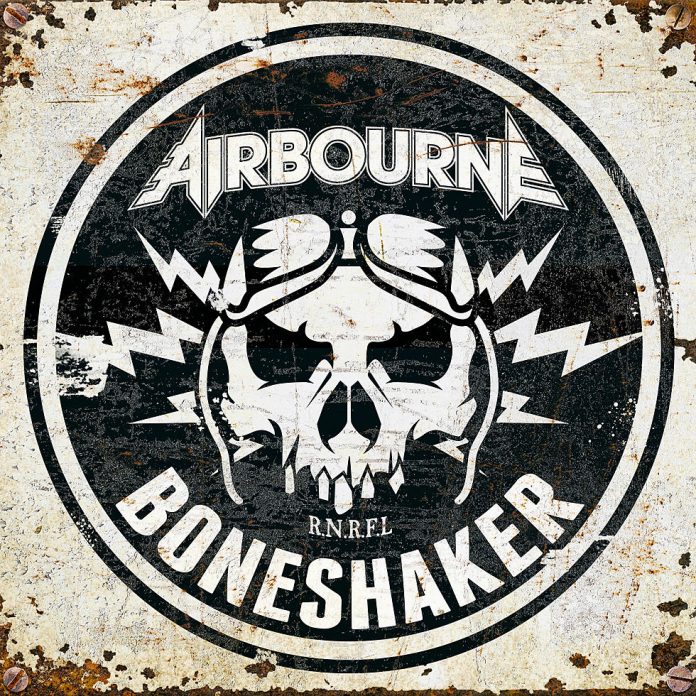 Airbourne are one of the finest live bands there is.

That’s a fact, I’ll be taking no questions, nor will I be opening up any debate on the subject.

There is no band, really, that puts more into it. It almost doesn’t matter whether you like their records or not, you get swept up in the maelstrom, of sweat, beer, riffs.

“Boneshaker” is their fifth record. And speaking about it, guitarist Matthew Harrison said this: “The whole sentiment we were after was about rock n’ roll for life. We wanted to create something tattoo worthy….and stood the test of time.”

When they announced “Boneshaker”, they said they were making it with Dave Cobb, who made Chris Stapleton a megastar, made Whiskey Myers into rockstars and made some of Nashville’s most challenging stuff.

That got me thinking that it might be different, but nope. Look, if you liked Airbourne before you will love them now, because what Cobb has essentially done is make them Airbourne on turbo-charge.

So yeah, it sounds like a load of hooligans playing Rose Tattoo, and if previously I have always thought the AC/DC thing has always been kinda lazy as they were more unkempt than that, then it applies here. In spades.

There’s one other thing that informs “Boneshaker” besides beer, riffs and fun. And that is sex. Pure and simple. Lord only knows what put Joel O’Keefe in this kind of mood, but he isn’t even arsed with double entendre’s this time around. Merely single ones.

Not one ounce of subtlety is had on these ten songs. Whether on the title track where “we both want it bad, so let’s do it right here” is more than a hook, it’s a mantra, or on “Burnout The Nitro” where it might as well be Angus and the lads, or on the gang like “This Is Our City” – which cheerfully rhymes “obscene” with “kick you in the spleen” – it hammers it home.

So, Airbourne don’t care one bit whether you think “Sex To Go” is infantile, they just want it to be dirty blues, and they aren’t remotely fussed whether the riff for “Backseat Boogie” has been heard a million times before. They’ve got the same records.

And that’s sort of the point, level any accusation you like at this and the reply would be the same, “its just for fun, mate”. “Blood In The Water” couldn’t sound more like “Whole Lotta Rosie” if it tried to be honest, but here’s the thing. When the beat for “She Gives Me Hell” kicks in , you are already imagining it being played live.

“Switchblade Angel” is 126 seconds long. It’s got more energy than a two year old and has more fun in the sandpit, and while “Weapon Of War” is more nuanced you still couldn’t call it “mature” and neither would they want you to.

The last one is the most important. “Rock N Roll For Life” is the band’s motto, surely. Nothing can divide us, as long as we’ve got music, is basically the sentiment here. They know it. We know it. We’re all this together.

Which is why if you don’t like Airbourne you won’t like this. And moreover, the band couldn’t give two shits. Because in front of their own crowd, in some festival field, this is going to take on a life of its own.

You can feel it in your bones.

Previous article
BAND OF THE DAY: HER CHARIOT AWAITS
Next article
GILBERT GETS UP