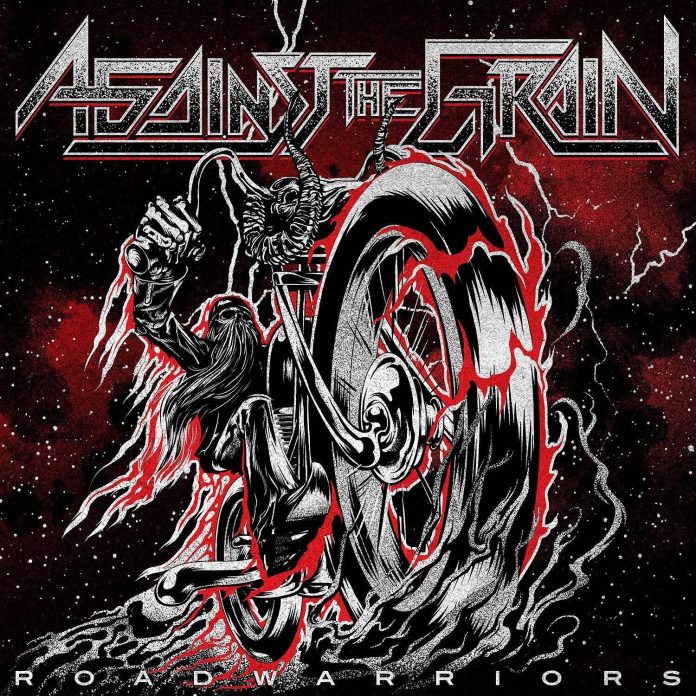 It is perhaps possible that there’s been a bad record made by a band from Detroit. But the Rock City, well, it never lets you down. The history of the place and the legacy it’s artists have created is well known. But the staggering thing is not what rises to the top, but what’s underneath.

Earlier this year we reviewed a magnificent EP from a real underground band from the locale, Dead In 5, and now we’ve got this.

“This” to be exact is the new album from Against The Grain, who are building quite a reputation for themselves and are quickly moving up the ladder. They share a booking agent with the mighty Mos Generator, who’s frontman Tony was telling everyone about them recently. Perhaps slightly more crucial is this fact: They share a U.S. label with Peter Pan Speedrock. And “Road Warriors” shares a similar ethos with the Dutch kings of turbocharged rock n roll. For much of the record ATG seem to be ready to cram as many breakneck riffs in as they can.

It begins with one, in point of fact, as if to highlight the issue. Think Thin Lizzy, think Iron Maiden and think Kiss, as “Here To Stay” gets going. It’s simple – this type of hymn to heavy music has been done millions of times, except that when Chris Nowak sings those words he does so in a manner that suggests there is nothing fake or false about the sentiments.

It’s far from the only time that a veritable cornucopia of rock is plundered. “Till We Die” and “Afraid Of Nothing” take Motörhead on a knife fight and it’s far from clear who would win, “What Happened” slams a little more, and regrets nothing before it finishes, and “Sirens” is a mighty fine slab of stoner rock.

Now, you could argue that such flitting between styles could mean they lack focus, and on some records, that would be the case. Not here, as it’s all played with such a lack of self-conscience and possess a clear thread of downright ebullience.

“Guillotine” which fires up a real slice of groove is a real highlight and “Run For Your Life” packs more of a punch in 105 thrilling seconds than is healthy and when Nowak screams “get out of the way, you’d guess he meant it.

Ending with its longest song – and that’s only four and a half minutes – “Nothing Left” rather deftly sums up all the albums ideas, and does so with about four guitar solos, just in case you hadn’t got the message. It would, like everything else on this record, be awesome live you suspect.

Rather apt for a record called Road Warriors and rather in keeping with Detroit.