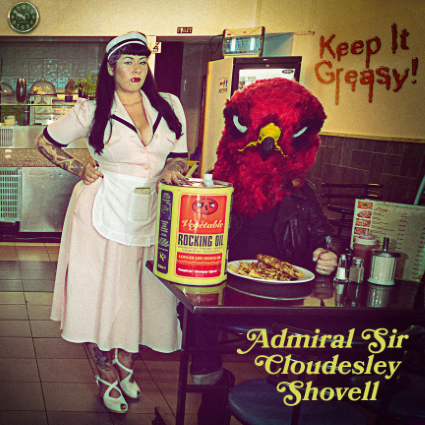 This is Grease, and the one you want….

The album cover for this, the new one from Admiral Sir Cloudesley Shovell (henceforth to referred to as ASCS or The Shovell ‘cos I’m bollocksed if I am typing that out every time) tells you everything you need to know about the band.

The band mascot, some demented bird that looks like a cross between one of those shit mascot’s that football teams have and one of those evil clowns that are all over the news, sits in a greasy spoon caff, while a pissed off looking waitress serves some horrid looking slop.

Subtext: this is British, it belongs to a bygone age and its filth.

ASCS have proved time and again that they are basically without peer in the whole dirty hard rock thing. Equal parts Motorhead, Orange Goblin and some  Readers Wives magazine with the pages stuck together, they are the band that Johnny Gorilla (their gravel throated singer) is in when he’s not in Gorilla (basically the same, just faster). And the eight songs here aren’t even trying to be anything other than riotous good fun.

Those looking for something groundbreaking and achingly cool can – and probably should – look elsewhere. Those who want riffs, fuzz, solos and lyrics like this from “Potato Boy”: “you wrote a letter to your mum, but she never wrote back/you tried talking to your dad, but he kicked you in the sack” should get this immediately.

Hell, the damn thing even kicks off with a guitar solo and “U Got What I Need” is as influenced by the rock n roll of the 1970s as can be, “Heavy Brain Part 2” is a Sabbathy bass groove (if this was American we’d call it desert rock or some such epithet) and does what it chooses over nearly seven minutes.

“Hawkline Monkster” (no, us neither) is a freak out of the type Dave Wyndorf would construct if he had grown up in London, while “Paid In Full” gets cowbell bonus points, and is a stone cold knock out brilliant song. The chorus of “The day you left was a bloody good night” is a thriller.

“I’m Movin’” shakes its hips and thinks about getting funky, while “Tired N Wired” is plainly and simply rifftastic, and after “Wrong” has got the bizarre classical music samples out of the way it contents itself with doing it one more time with feeling.

The Shovell are never going to be mainstream, and that’s their appeal. MV will wager right now that if they’d made it to the Top of the Pops studios back in the day they’d have been in Fearne Cotton’s dressing room sniffing her knickers.

Instead they are the great underdogs of British Rock and bless them for it.