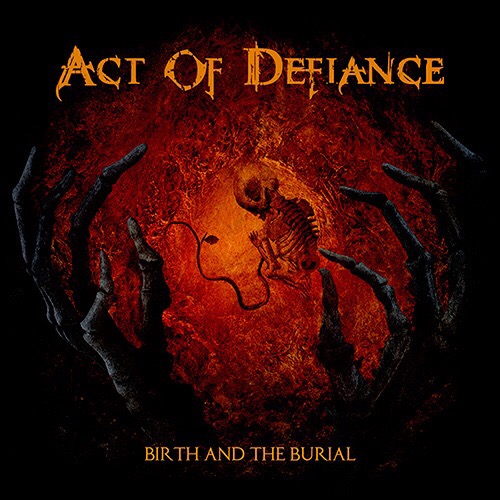 As the drummer and guitarist respectively on Megadeth’s most recent material, Shaun Drover and Chris Broderick had helped reinvigorate the band in the studio, but more particularly on stage, so it came as a bit of a surprise when late last year a statement emerged confirming the duo had left Mustaine’s boys.

The pair are too talented and have too many ideas to let such a setback stop them, though, and instead of moping they formed a – whisper it – supergroup with Shadows Fall bassist Matt Blanchard and Henry Derek, who is best known as the singer in Joey Jordison’s post-Slipknot endeavour Scar The Martyr.

That last two are important because with them onboard Act Of Defiance was always going to walk the line between modern and thrash metal in a way that some others might not. “…..Burial” might start with a song called “Throwback” but although the record knows where it came from, this is no trad thrash affair where we all wallow in nostalgia and get our hi-tops and Kreator sleeveless shirts out.

Instead “Throwback” in particular and the album as a wider whole is a masterclass in what we might call accessible brutality. “Legion Of Lies” has a galloping riff, fine drumming but there is enough in the vocals – which range from throaty rage to an almost Alice In Chains-esque pre chorus, to hold the interest throughout.

But, crikey, when these boys do decide to go for heads down thrash, they do it better than anyone has for a very long time. “Thy Lord Belial” is genuinely thrilling and downright nasty at the same time, while “Dead Stare” outdoes it for sheer abandon: “Vengeance/strike you down with no apology,” is its opening couplet and this is a record so aggressive that it would take a wrecking ball just about anything just to see it crushed, while all the time retaining an ear for melody that is most unexpected, but nonetheless entirely welcome.

A couple of times, the pace slows, to give the work even more menace. “Obey The Fallen” is the pick of these as it throws off the shackles to become almost joyous, while the ominous drums and bass of the closing title track hint at something monolithic. As should be expected on this album, it does precisely the last thing you think it might, and “Birth And The Burial” instead mixes conventional metal with a gentle acoustic melody in the chorus.

When you saw the cast of characters involved here there was a suspicion that Act Of Defiance might just produce something that was a little special. That they’ve not only done this, but rather surpassed the sum of their considerable parts is to their eternal credit.

Modern heavy metal with thrash overtones hasn’t sounded quite so good for a while. Over to you everyone else – Megadeth included, show us what you’ve got, because Act Of Defiance have laid down the marker.