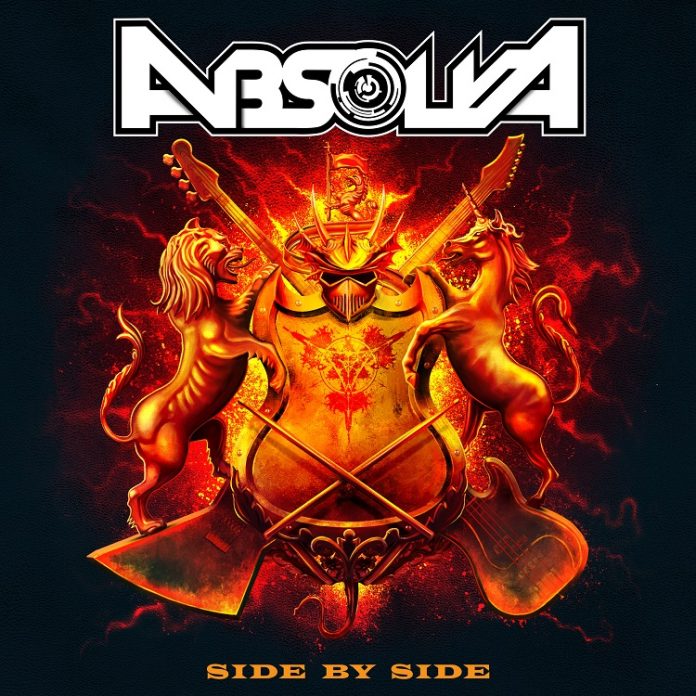 As I mentioned Christopher Appleton so much on the recent 10/10 review of Blaze Bayley’s latest live album, it feels apt that I should start this review of Absolva, the band he fronts, sings for and produces, with a memory of the first time I saw him play.

It was, somewhere close to 15 years ago I should think, and Fury UK, the band that Absolva grew out of, were opening for Blaze’s then band (not a patch on the one he has now, which is essentially Absolva) and he was doing a track called “Death By Lightning”. I was there with my brother, neither of us musical. But you couldn’t help but be amazed by what he did that night.

I was privileged to watch them loads of times after that. When they opened for Iced Earth and Saxon we got their early because in football parlance “one of our own” was on stage.

The reason for this history lesson is simple actually. Because when Fury UK’s bass player, Luke Appleton (brother of Chris) went off to conquer Iced Earth, as it were, the new band had a slightly different sound. An extra member, and less of a metal, more a classic rock feel.

The change that had been noticeable, but gradual, is complete on “Side By Side”, because here, they are standing shoulder to shoulder in metal brotherhood.

And you know what? It suits them.

Right from the opening of  one of the true highlights “Advocate Your Fate”, which sees them settle into a groove that long term fans will recognise as almost the “signature” sound if you like, the difference is that it is a little beefed-up by Luke Appleton playing rhythm guitar.

It’s fair to say  – and this isn’t a criticism – if you like that one, then you will like the rest too. “Burning Star” – dedicated to the life of Roky Erickson – is another slice of metal, but it is one that never gets to clichés.

That is because the men in Absolva, Karl Schramm on bass and Martin McNee (who was also in Fury UK) are too talented to allow that to happen. So “The Sky’s Your Limit” has a bit of Maiden in it, but like the title suggests, its not about to be constrained.

The title track is a great example of what they do. You can pick all kinds of influences out here, from UK bands to Metallica and everywhere in between, but what you can’t do is pick a band they copy. “On the road,” sings Appleton here, “we share a dream”, and you can hear that, you really can.

“Living A Lie” has an Eastern tinge and a bit of menace about it, and is more of a headbanger, and if you can’t imagine anyone here not being true to themselves, then the lyrics indicate otherwise.

In the middle, though, and it isn’t hard to see it as a type of centrepiece is “Legion” – Judas Priest would be thrilled to call this one of theirs, let me tell you. This is the jewel in this leather studded crown.

“Eternal Soul” has a bit of a gallop, “End Of Days” has more grandiose dreams. Power metal (ish) it thankfully eschews the silly excesses of that genre, but retains the scope, while “Heart Lets Go” is resolutely and proudly 80s – right from the stack harmonies at the start.

The closing solo is a belter, and really, there aren’t many more talented guitarists around than Appleton, a point he cheerily underlines on the closing power ballad, “From This World”, and goodness, what a crescendo that reaches!

To be fair, its not quite the end, given that there are covers of “Two Minutes To Midnight” and “Heaven And Hell” finish it off. You can argue about their need if you like, but these are fans playing the tracks they love – and no one does b-sides anymore, which is what these would have been in days of yore.

Back in 2015 I reviewed their “Never A Good Day To Die” record and concluded them to be “the best underground band in Britain”, but I am not sure that applies these days. Underground, overground? Who cares? Absolva are just a superb metal band.