American Black Metal forges a new path (of broken glass) through a once unlikely source. 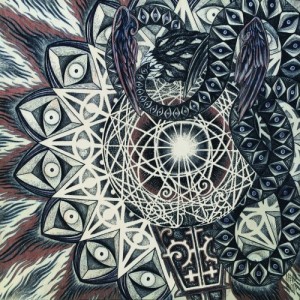 Mention the name Abigail Williams in the late 1600’s and you would have been greeted with tales of demonic possession and witchcraft. Abigail was one of the first accusers in the infamous Salem Witch Trials of 1692 which led to the imprisonment of over 150 suspected witches when she was just 11 years old.

Mention the name Abigail Williams today and a different, but no less sinister image emerges in the mind, that of an American band that take the pure Norwegian Black Metal form and twist it around until it forms a noose, similar to the one used to hang the witches 300 years prior, around the neck of expectation and drags it kicking and screeching into the abyss.

For a band that is just over a decade old,  they have gone through Hawkwind-esque line-up changes but the present quintet appears to be as solid as the blackened foundations on which their brand new album “The Accuser” stands.

Originally the band employed a symphonic black metal sound akin to Dimmu Borgir and such but that was replaced by the more raw, gritty and powerful approach to black metal on their second release, although not without adding touches of psychedelia along the way, and that style is helping to make them stand apart from the genre’s medium pacers and forcing them to the front of the pack.

“Path Of Broken Glass” introduces the album in a typical Scandinavian-inspired desolate wasteland of blastbeats and haunting atmospheres all forced along said path by a ferocious riff that chills to the bone.

“The Cold Lines” provides less of the bluster of the opener and more of the introspective and eerie moments of which the band provide, and excel in, regularly through the eight tracks on offer. Technically, for some, the album may not stand up to its predecessors in certain aspects but through pure force of will, wish and desire they have created their most intriguing recording to date.

Speaking of “Will, Wish and Desire” this is the track, appearing halfway through the album, that musically leans to a lighter, although still dark, sound, minus blastbeats and razorwire guitars. That said you would never guess from the vocals which consistently follow the standard screech/growl formula throughout the album, albeit not without some impressive and challenging vocal lines from Sorceron.

There are plenty of subtle mood shifts on this album and the final track “Nuummite” could be classed as post-rock with it’s languid melody and slow drawl vocals. It closes the album perfectly with it’s near empty void filled by a more American style guitar sound that at times feels like it could have been part of a soundtrack to a desert road-movie. The lack of orchestration on The Accuser makes for a more harsh and unforgiving soundscape which allows the band to explore more deeply the darker side of their music.

In 2012 the band announced that that year’s US tour would be the last ever and the band would end. Thankfully, a change of heart occurred and the band have never sounded better or more confident.

The Accuser is out now on Candlelight Records