REVIEW: AARON BUCHANAN AND THE CULT CLASSICS – THE MAN WITH STARS ON HIS KNEES (2017) 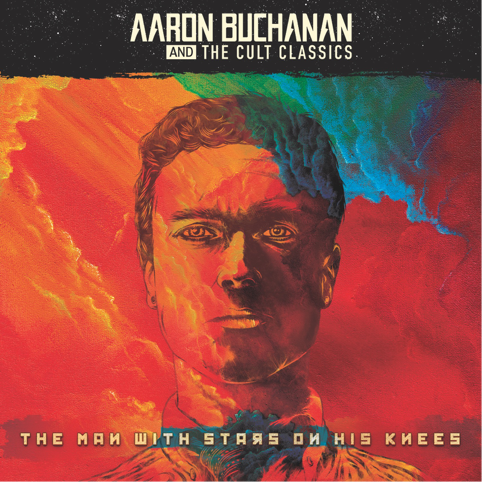 The debut album with the brakes off

Aaron Buchanan was the singer in Heaven’s Basement when they did what they had long been tipped to do, and got rather big.

They did it in large measure because of Buchanan, who was – and probably still is although MV hasn’t seen this new incarnation yet – a phenomenal frontman.

If it came as something of a shock that he left HB, it is most certainly no surprise that his new venture is compelling and interesting.

Aaron Buchanan and The Cult Classics is more than that, though. You get the sense that this is the singer with the shackles removed. Indeed, those looking for a “Filthy Empire” MK II can look elsewhere, because “The Man With The Stars On His Knees” is not that at all.

For an accurate representation of what Buchanan is now, you can look no further than the quite astonishing title track. An opening section that recalls Jeff Buckley’s soaring vocals, gives way to an arena bothering chorus and then does something totally unexpected – it manages to find a Queen-esque level of grandiosity (and it should be pointed out that it does this in under six minutes, which is no mean feat).

None of this would be possible with a crack band around him and Buchanan has assembled one. Sister Laurie on guitar, drummer Kev Hickman (RavenEye) together with another six stringer Tom McCarthy and bass player Chris Guyatt have given this a real bedrock and in so doing have bought the vision to life.

There is a – for want of a better term – a grunge element here too. “A God Is No Friend” sees Buchanan adopt a type of Chris Cornell roar at points, and interweaves this with some AIC haunting harmonies, while de facto intro “Show Me What You Got” has the same gargantuan feel as “Superunknown” era Soundgarden.

When it does truly get underway, the album does so with a heads down rocker “All The Things You’ve Said And Done” which perhaps is closest in feel to “….Empire”, but “….Knees” is at its best when it seethes and broods like “Dancin’ Down Below”.

Hickman’s fine drum work informs “Devil That Needs You”, which comes complete with the biggest bass breakdown since The Wildhearts’ “Urge”. This is followed by “Journey Out Of Here” which has a Biffy Clyro style eye on arenas – and if nothing else it shows the ambition that burns throughout this.

A collection that brims with ideas, “Left Me For Dead” comes at things in a kind of Stone Temple Pilots way, while the Eastern sounds and crushing guitar lines in “Mind Of A Mute” take that into some real different places and “Morals” has an epic feel on a three minute pop song length.

When he formed this band, Aaron Buchanan did so with the stated aim of “being true to the art in my mind” and no one can accuse him of not doing that. At the album’s inception he said that he was “proud to fly the flag for something a little different”. With “The Man With Stars On His Knees” he’s done all that, but he’s done so much more.

Where the record takes him only time will tell, but if passion and desire still count for anything, Aaron Buchanan and his cult classics are going to the very top.

Previous article
Ghost In
Next article
Thy Tour Is Murder