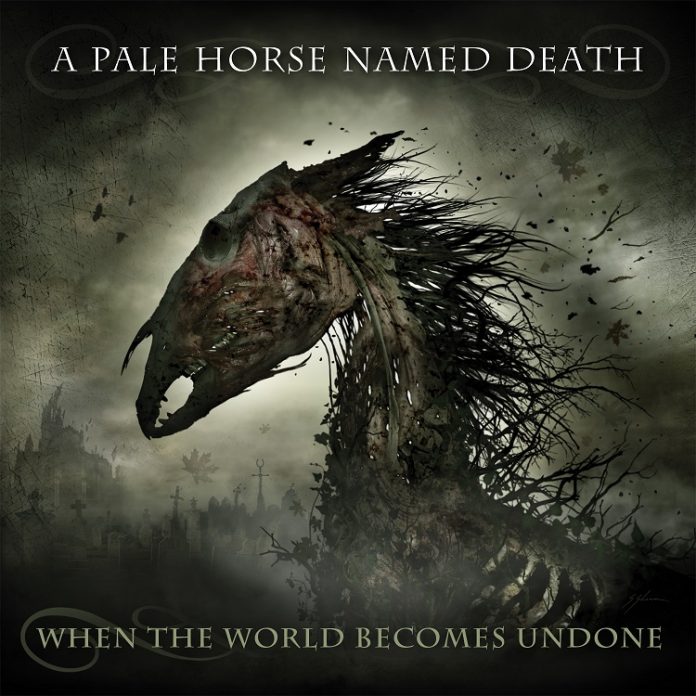 Cards on the table here. I am not the world’s biggest doom metal fan. A Pale Horse Named Death tend to get lumped in with that stuff. This neglects the fact that – rather like Paradise Lost – these boys know how to write a hook. A dirty great chorus that you can sing for days. You want proof? Ask the indie kid with the top knot who sits by me at work and has had to listen to me murmuring “I’ve got a funny feeling that God is dead” in the days since this arrived, which is the key line on, not just the “When The World Becomes Undone”, but the record as a whole.

It is interesting too, how that one ushers itself in on the back of the unsettling intro (it is a feature of the record that it uses instrumentals brilliantly) and some lilting piano. Then it pummels. And it doesn’t stop. Like that joke in The Simpsons where Sideshow Bob steps on the rakes, it just keeps going and going. And goodness me, it’s like being bludgeoned. And you’ll love it.

The boys, you see, are back in town.

It’s interesting, isn’t it, how perceptions change over time? Back in 2011, I remember picking up the first A Pale Horse Named Death record solely based on the fact that Sal Abruscato, their singer, was the drummer in Life Of Agony and Type O Negative, their drummer Johnny Kelly had replaced him in the latter and guitarist Bobby Hamdel of Biohazard was on a few songs.

Fast forward eight years and frankly none of the back-story matters for shit. Now, all I care about is that “…. Undone” is the first APND album in six long years. “Yes, that’ll be ace” is still the thought, but for entirely different reasons.

You can almost feel Abruscato’s frustrations at the last six years (he has had what he describes as “crazy” times in his personal life, and they all flood out here.

“Love The Ones You Hate” proves yet again that you can call this what you like, but it has melodies to kill for. A little touch of The Mission, maybe, some Killing Joke style urgency, whatever, there is a glorious beauty in this darkness.

Eeriness lurks everywhere you turn. “Fell Inside My Hole” has a fragility not heard since Stabbing Westward, but a riff to smash down the nearest wall, while “Vultures” likes the idea so much it does it again over perhaps a more starkly industrial landscape, and there is a real Alice In Chains flavour about “End Of Days”.

“We All Break Down” in common with everything here, is gargantuan in intent, and does things entirely on its own terms, but the guitar work from both the frontman and Eddie Heedles together with the interesting vocal patterns, ensures that this is something that has an originality and a freshness.

“Lay With The Wicked” burns with a more hard rock flame than many, it even has an “oohh la la la” melody (and that’s something no one expected). It is also closest to the wonderful Type O in terms of its chug. “Splinters” is the closest this gets to a ballad (and really, although it’s slow and monolithic, that isn’t very close at all) and even for an album as sprawling and brilliant as this, the incantations of “Dreams Of The End” meander and find something in the depths of wherever it visits.

And for whom the bell tolls is never far from the thoughts of the nightmarish “Closure” either. A track that suggests that the pain, the struggle, well, it’s going to continue.

When I was singing “I’ve got a funny feeling that God is dead” the other day, the kid with the top knot at work turned to me and said: “why is everything you sing so damn depressing?” I merely asked him to look at the world he lived in. These are dark times. It needs dark music, and it is clear that everyone involved in “When The Becomes Undone” needed the catharsis it very obviously brought with it.