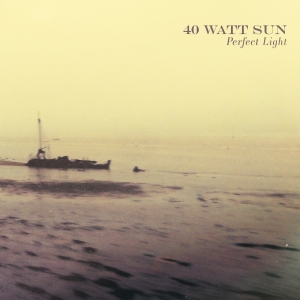 40 Watt Sun is in essence Patrick Walker (Warning, ex-Solomon Kane) who has his third album `Perfect Light` released this month which follows his previous album `Wider than the Sky`. `Perfect Light` is the first 40 Watt Sun album created without a full, formal band structure but Patrick enlisted an array of accomplished musicians to fulfil his vision for the album, including, among others, Andrew Prestidge and Roland Scriver (The Osiris Club), Ajit Gill (Vertaal), Lorraine Rath (Amber Asylum/Worm Ouroboros), and pianist/composer Chris Redman.

The album opens quietly with `Reveal` which I have to say is quite melancholic. The lyrics seem to relate to a promise that the narrator will always be there for that certain someone when they need you. Although it`s stripped back with just an acoustic guitar and vocals, it`s a deep and poignant offering enhanced by some sweetly shared harmonies and what sounds like a cello. There`s a similar texture to `Behind My Eyes` but with a picked electric guitar, steady drum beat and synth like keys floating throughout. The vocals seems more matter of fact and again we enjoy some harmonies but much more infrequently throughout. It appears to relate to a relationship that is growing but with all the expected trials and tribulations of accommodating another person in you life.

`Until` is another dreamy number that has a constant drum beat and guitar chords laying a base for the vocals to convey the depth of feeling that the chronicler has for their partner. The deep seated desire and pain is almost tangible in the delivery which is enhanced with some complementary harmonies from Nicola Hutchinson as the number progresses. There seems to be a more introspective, reflective feel to `Colours` which has vocals and some captivatingly intricate guitar chords accompanying them. The guitar takes over in the last minute or so and is quite hypnotic as you can hear the guitar frets as fingers move across them, while a piano ripples softly underneath.

`The Spaces In Between` is driven by piano, a rhythmic guitar chord and a brushed drum as the singer reflects on the overwhelming feelings they have for a lover who I wasn`t quite sure was still in their life or not. It seems to have a less mournful sense than previous numbers but still retains tremendous emotion. I thought `Raise Me Up` kind of ambled along. The singer`s vocals rose and fell and ebbed and flowed during this enormously intense musing of a relationship that seems to be at a critical juncture. We almost head off midway through with some shimmering guitar chords layered over the shuffling drum beat before the expressive vocals passionately return and lead us along and out.

`A Thousand Miles` has a lighter folkier vibe with acoustic guitar and drum leading the singer through this tale of a floundering romance. We have occasional harmonies and glistening guitar riffs as the number progresses. Patrick`s undulating vocal and the lyrical content ensures that this composition became almost contemplative. meditative and self-analytical. The album concludes with `Closure` a number that falls somewhere between Bread`s `Make It with You` and Nick Drakes `Northern Sky`. Another profoundly philosophical musing on life.

`Perfect Light` is a release that needs a little time to permeate, almost like a fine wine or a luxurious tea, it needs a little space to breathe and really soak in. It`s a serene tender, delicate and almost haunting listen that recalls the passion and pain of relationships with skilfully constructed lyrics. It does have its melancholic moments but throughout those there is still a slither of bright light shining through to lift our spirits.