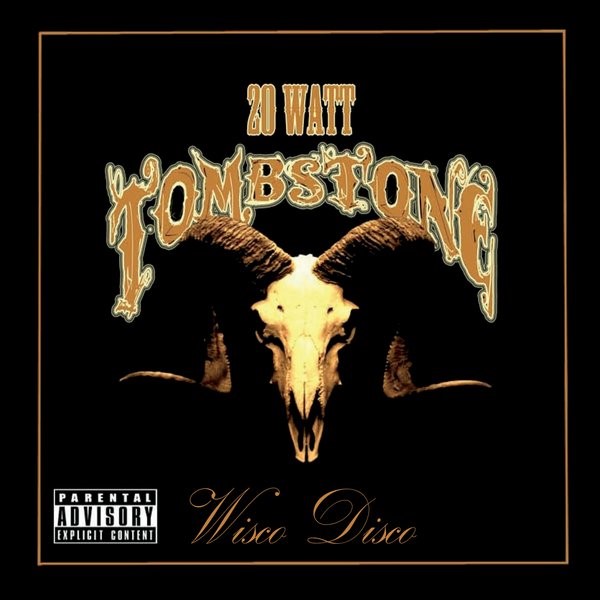 Left Lane Cruiser got themselves some press and profile last year with the release of their excellent ‘Dirty Spliff Blues’ album and if you liked that, then you will absolutely love this.

20 Watt Tombstone is Tom Jordan and Mitch Ostrowski and they hail from Wausau in Wisconsin. They started the band in 2007 under the name of The Goddamns but a change of name in 2015 saw the release of their first eponymous album.  The noise this guitar and drums two piece generate is some of the funkiest, meanest blues since the renaissance of R L Burnside.

‘Wisco Disco’ opens proceedings with it’s driving bass drum beat and repeated blues lick. Next up is one of the albums highlights, ’Shitty Ex-Girlfriend’ (this song has a cracking video that be found on YouTube). More thumping drums, even dirtier sounding guitar and a great lyric pass by in a flash and will have you reaching for the repeat button. Track 3 is ‘Now She’s Gone’ which is slower number that smacks of the Jon Spencer Blues Explosion; the slide guitar on this song is greasy! The ending of this track heralds, in my opinion, the arrival of the albums best song. ‘Untitled’ has a terrific grooving guitar riff that drives the song along, getting the toes tapping and the head nodding – the louder this song is played the better it gets! ‘Pa Shot Ma’ is another with a strong RL Burnside/Jon Spencer influence before the penultimate track ‘Turpentine (Wade In The Water)’ thunders into the speakers, with its relentless beat testing how good your hi-fi really is. Album closer is ‘Goddamn’ and it’s another up-tempo number with great slide guitar. This song could do for 20 Watt Tombstone what ‘Motorhead’ did for Motorhead and become the song that defines their identity with fans.

20 Watt Tombstone are about to release a split album with Left Lane Cruiser and Maximum Volume Music will be reviewing that shortly. In the meantime do yourself a favour and add this to your record collection.