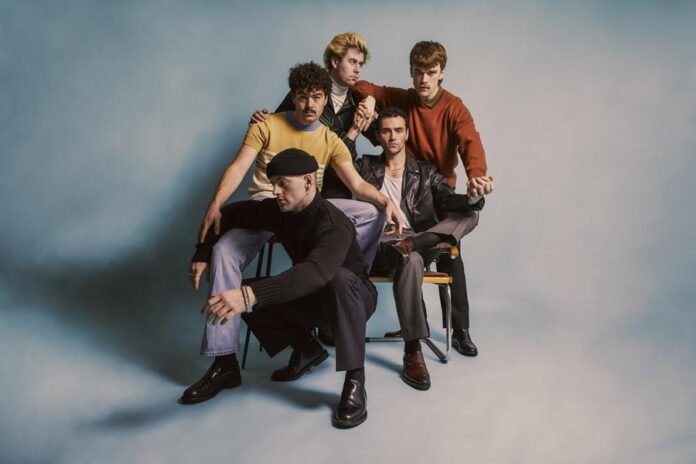 Today, Ireland’s The Murder Capital share “Return My Head” the last single to land ahead of their forthcoming second album, Gigi’s Recovery.

“Return My Head” is perhaps the most visceral of the singles released so far, an immediate, direct slice of alt-rock that delivers both aggression and melody paired to a lyrical motif that slots firmly into the sense of reinvention surrounding the album as a whole, opening as it does with the following: “I had to realign, To begin, To survive.”

Front man James McGovern explains further on the themes: “Return My Head was written in a place of pure frustration, feeling like our sanity had been unwillingly removed through periods of isolation. All I wanted at this point was to get my head back, and to throw it away again. But on my own terms. ‘Return my head, and throw it to the crowd’”

The band today also share a video directed by the band’s own Gabriel Paschal Blake. Recorded on a camcorder, it’s the first self-directed set of visuals from the band, with bassist Blake having the following to say about the making of the video:

“I wanted to show the rag dolling that can occur to us going from one state of being to another, while always remaining being the same person. The extensions of ourselves that we create to protect ourselves even when we’re alone, and the evident and necessary advice that we receive to continue following and perusing our passions from our friends and family, demonstrated by my own family friends Megan, Nic, Ruairí and Pump.

To me, ‘Return My Head’ is the desire to return your mind to a place of peace and stability, and the belief that to do so, is possible. We shot it in my old secondary school recreational hall. We produced it ourselves. At its best to me, the narrative of the ‘Return My Head’ about coming back to a safety.”

The video was premiered today by The FADER, who say the track is “an instant hit and one sure to become a live favorite.”

Watch the video for “Return My Head” HERE

The John Congleton produced Gigi’s Recovery, set for release on January 20th via Human Season Records, follows the Irish band’s celebrated 2019 debut album, When I Have Fears, which reached a #2 position in their native Ireland and Top 20 chart position in the UK, and featured in media end of year lists internationally with The Guardian calling it “an outstanding debut from a great new band who play it like they mean it.” The album will be available on CD, in several LP editions, and digitally and is available for pre-order HERE.

While the material on When I Have Fears captured the vital beginnings of the group, the 12 songs of Gigi’s Recovery push the band into ever braver sonic territories, oceans apart from previous peers. Ambition is put right at the front and center, with the inventive, expansive guitar work of Cathal Roper and Damien Tuit paired to a precise and intelligent rhythmic unit in bassist Gabriel Paschal Blake and drummer Diarmuid Brennan. Electronic elements are noticeably more prominent across the record, with industrial inﬂuences explored in greater detail than ever before, James McGovern’s bold melodies acting as a reassuring anchor so we never get totally swept away into the band’s new found soundscape.

The Murder Capital also made their live return this year performing at the likes of Primavera Sound, VYV Festival and Solidays, as well as opening for Pearl Jam at British Summer Time. The performances follow their largely sold-out EU / UK tours in 2020, which saw them sell out their biggest headline show to date at London’s Electric Ballroom.

The band will tour the new album throughout January and February with a series of acoustic in-store performances and full band shows across the UK and Ireland.

Full dates are below.