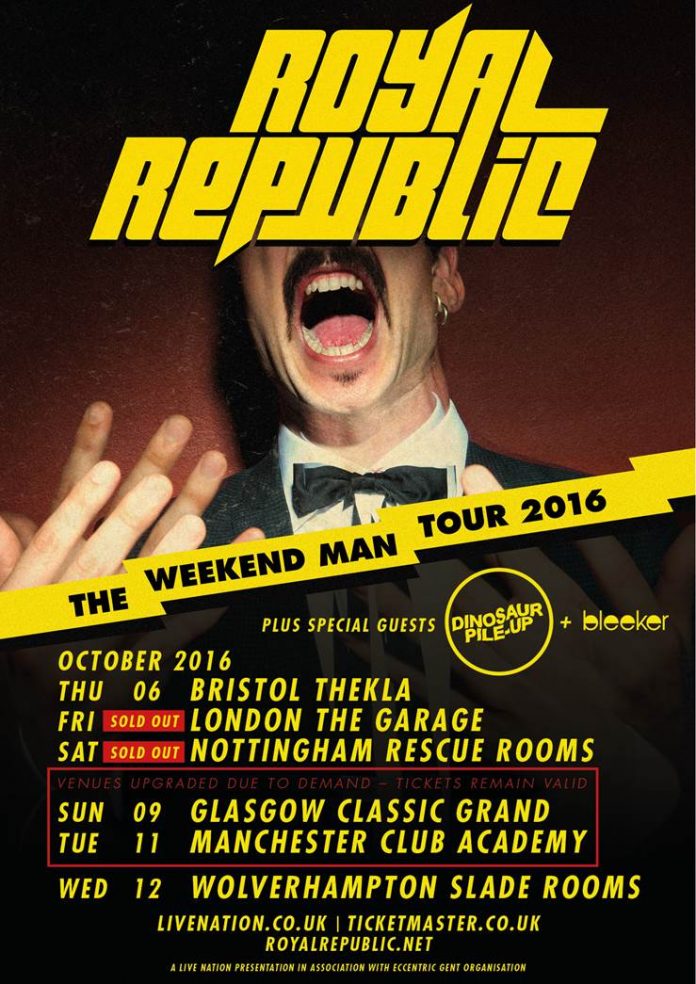 After receiving an extraordinary response, Royal Republic’s headline dates atLondon’s Garage & Nottingham’s Rescue Rooms are now sold-out; this news comes hot on the heels of venue upgrades in both Glasgow & Manchester, with these shows moving to the Classic Grand & Club Academy respectively, due to high ticket demand.

Royal Republic – who first joined forces in Malmo Rock City in 2007 – recently opened the Lemmy Stage at the Download Festival, and are now tying up a European festival run before kicking off their October headline tour over here.

Comments vocalist/guitarist Adam Grahn, “A wise group once said, ‘being in a band is like being in a relationship, and concerts are like sex’. The return to Download Festival was nothing short of orgasmic on our part, and by the time Royal Republic hit the shores of the UK again in October, the nymphomania will know no limits!”

The Swedish quartet have also announced their tour opener for the UK leg which comes in the form of Canadian alt-rockers Bleeker; Dinosaur Pile-Up will appear as main support on all dates.

In other news, the band’s music video for the single ‘Baby’ has been selected for the Music Video Programme at the 24th Raindance Film Festival in London in late September / early October. Fans have the opportunity to check out the clip on the big screen in the capital during the festival run. For further details head over to:-http://calendar.raindancefestival.org/films/royal-republic-baby

Latest RR studio album ‘Weekend Man’, crafted in Berlin’s Fuzz Factory Studios by producers Christian Neander & Michael Tibes and released earlier this year viaSpinefarm Records, sees the dapper Republic-ans delivering their customary rock thrills with even greater gusto – a bold statement of wild-eyed intent founded on big hooks, mountainous melodies and a signature sense of fun. Generally speaking, the aim is to put smiles on faces, but now an’ then a deeper, darker side peeps through, as displayed on the band’s video for ‘Any Given Sunday’ – an “epic tale of love, death & desperation” featuring legendary Swedish soap star Gunnar Mosen.

Watch the official video for ‘Any Given Sunday’ here:

*Upgraded from King Tuts due to high demand.

**Upgraded from Academy 3 due to high demand.

The above tour carries an Extreme Entertainment Warning.