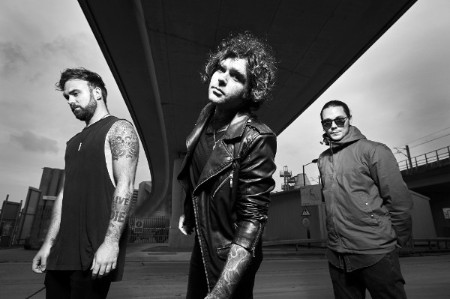 UK rock trio Reigning Days have released their new single ‘Inhaler’, the latest track to be taken from their upcoming debut album Eclipse, out April 13th via Marshall Records.

‘Inhaler’ is an explosion of anthemic rock, opening with a piercing guitar hook before a thunderous bassline drives the tune into its stadium-sized chorus.

Following their last single, ‘Gravity’, and their critically acclaimed debut EP in 2016, ‘Inhaler’ is the latest bold statement from a band who are on the fast track to rock stardom.

Fresh from their Marshall Amplifications / Independent Venue Week tour with King Creature last week, Reigning Days have now confirmed that they will return to The Great Escape this year to play on the Autonomy Music stage after being one of the highlights of the festival in 2016.

Over the last two years Reigning Days have established themselves as one of the most exciting upcoming rock outfits of 2018. Their previous singles ‘Friendly Fire’, ‘Empire’ and ‘Renegade’ have earned them radio support from the likes of Radio 1, Kerrang! Radio, Planet Rock and more. They have also played devastating sets at festivals around the world and had support slots with the likes of Feeder, Enter Shikari and Lower That Atlantis.

Reigning Days are now set to take their gargantuan sound to the next level.