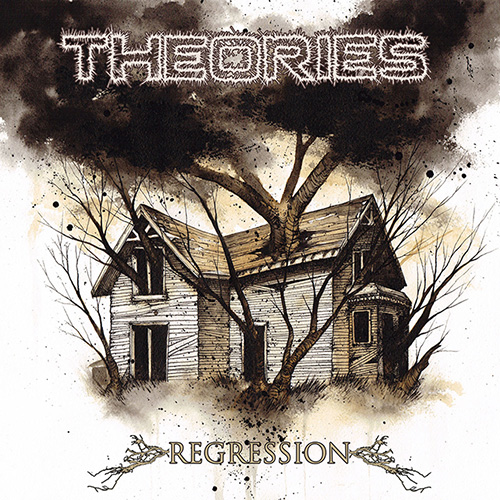 Seattle death grind terminators and recent Metal Blade signees, THEORIES, will a drop the ferocious wares of their new full-length upon the masses this Spring.

Titled Regression, the ten-track bruiser was recorded at The Red Room and The Boiler Room with producer/engineer Derek Moree (The Sword, Pelican, Minus The Bear et al) with mixing and mastering manned by Visceral Sound’s Scott Hull (Pig Destroyer, Agoraphobic Nosebleed) . The resulting ten cuts make up one of the most belligerent releases from the Metal Blade stable in recent memory. Recently commended by the LA Weekly for, “bringing something new to the deathgrind table,” THEORIES‘ Regression is a gristly, fuck-all soundtrack to social discontent, economic uncertainty, environmental catastrophes, and the inevitable cycle of decay. Doused in gnashing, prototypical hyper speed blasts and sub-nuclear riff incursions, the band’s meticulously-executed yet organically-scornful delivery is difficult to dismiss. Still, listeners will find moments of dissonant groove and clarity, as well guitar leads not often heard within the genre.

Experience the sonic punishment that is second cut, “Cycle of Decay.”

THEORIES has been propagating the seeds of bleak, dark, and terminally infuriated grind metal in the pacific northwest since their 2011 inception. The band, comprised of current and former members Samothrace, Skarp, and Book of Black Earth, released their debut EP that same year. Their touring campaign followed shortly thereafter, and have since terrorized the stages through the US on nearly a dozen tours and to festivals including Maryland Death Fest, Chaos in Tejas, Southwest Terror Fest, and their most recent tour with new label mates, Cattle Decapitation. Vocalist Rick Powell, guitarist Lee McGlothlen, bassist Kush Karimi, and drummer Joe Axler are of a singular focus to tour as much as possible touting their punishing audio violence.

THEORIES‘ Regression will detonate on March 24th, 2015 via metal Blade Record with addition teaser track and live abrasions to be announced in the months to come.