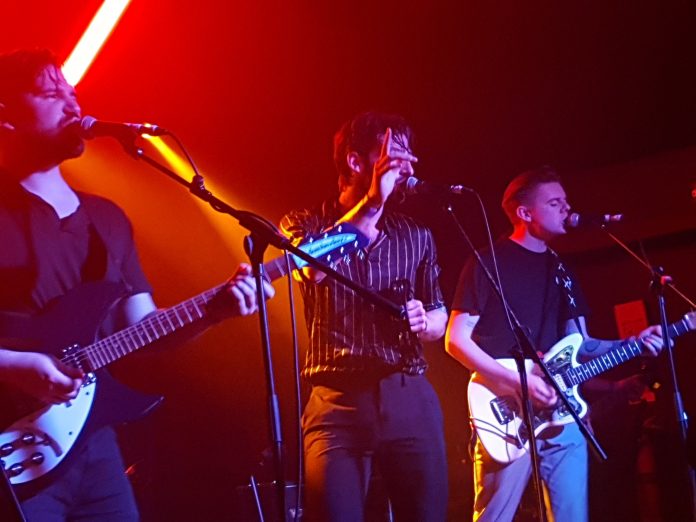 “Here’s the reason we are playing here tonight. The real reason. Take it away Joe.”

With those words, in fairness, Fran Doran has nailed, pretty much, the point to Red Rum Club.

When they play “Matador” their debut album’s title track, he expands on his theme. “This song,” he explains, “was written before Joe came into the band, but once he had, man……it made such a difference.”

“Joe” is Joe Corby, and he plays the trumpet in the Liverpool sextet. Now, horn sections are always fun, of course, but this isn’t that. This turns an indie band from the North West into something like the Wild West and it elevates these songs into something they just wouldn’t be without him.

After releasing that first record back in January, they are on an upward curve. A sold out, hometown gig last night was – by all accounts-  euphoric, and the after party was apparently messy (“we are a little worse for wear today” smiles Doran) and there is a very decent turnout tonight. More than that, though, they are enthusiastic. You can see the buzz about the crowd, they know the words to these songs, they are invested in this band, and there is a feeling that RRC are on the cusp.

It’s there throughout the whole 50 minutes they are onstage. All of the “Matador” tracks are played. Not in order, thankfully, which gives it an air of unpredictability, but right from the moment that “Honey” kicks things off, there is a quiet air about the band, for all their modesty (and they seem humble, friendly, pleasant guys) they know they are going to do something.

The standouts are all here. A fabulous “Calexico”, “TV Said So”, “Remedy (To Clean A Dirty Soul)” and an absolutely uplifting “Angeline”, but interestingly, it is the clutch that aren’t on the album that most convince they are in it for the long haul.

Unreleased song “Ballerino” is going to be on the next release, and brand new single “Kids Addicted” – written with Rich Turvey of Blossoms – are not the work of a band that is going to be a flash in the pan. Nope, rather, they can sustain this. RRC have got something different.

They aren’t rock stars yet either. There’s no encores here. Just another song not on the album in “Alone Together”, before “Would You Rather Be Lonely?” finishes things off with a dance.

“This one is our one hit wonder” jokes Doran before he plays it. It won’t be their last. The sort of band you remember. The sort of band that, were they to play a Festival set in the afternoon would have people coming from other stages to check them out, and the sort of band that is destined to play far far bigger places than this. Red Rum Club are the horse to back, I reckon.