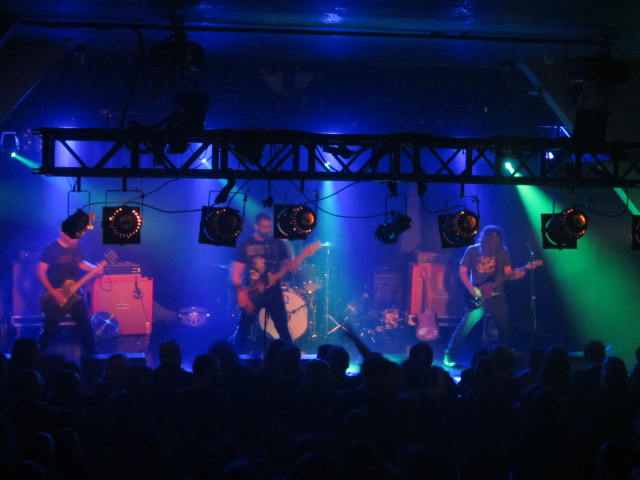 Riffs, in all shapes and sizes

All hogwash of the highest order and Red Fang prove it. Four years ago, give or take a couple of months, they were in the tiny room upstairs here, now they are in the second biggest and its packed.

That’s the kind of trajectory that tonight’s openers God Damn will no doubt be aspiring to emulate. The local boys have just released a new album – the superb “Everything Ever” has been out about a week – and all that is needed for a real assault on things is in place. Much more powerful and visceral live than on record, new songs like “Dead To Me” are crushing blows here.  They’ve added another member recently, and singer Thom is introducing James when he says the thing that hits the nail squarely on the head. “Fuck gimmicks. Fuck being compared to the latest gimmick” he reasons. “It’s all about creativity!” This is band that is reaching new creative heights and still won’t stand still. God Damn end in a wall of feedback, but with a load of new fans.

Miami’s Torche are very much a band that wants to let the music do the talking. It speaks eloquently for them and it shouts in very loud riffs indeed. A study in intensity, there is no denying the power of songs like “Sandstorm” and “Kicking” and equally there’s no denying that when they lock into a groove they are mighty affair. They’ve been doing this brand of stoner-meets-sludge for over ten years and it shows. Steve Brooks is the perfect antidote to those singer/songwriter storytellers, offering just a “thanks Birmingham” all night. Torche merely use their guitar sound to carry them as far as they can go.

Portland’s Red Fang stroll on with the minimum of fuss, plug in, shake hands and crack on. That’s the no frills approach that has seen them gain a fanbase that is best described as rabid. To the moshpit – it starts small and gets bigger – they are already kings.

With their “Only Ghosts” album not out for a fortnight, playing a chunk of it might have lessened the atmosphere. It might, in other hands, but not here. It helps that the likes of “Flies” and the wonderful “Cut It Short” are so good, driven on by the phenomenal dual guitars of David Sullivan and Bryan Giles, but honestly the crowd are simply in the mood for Red Fang.

There’s a choice selection of older cuts too. “Blood Like Cream” is tumultuous and “Malverde” thumps, but it’s the last three that remid everyone of the depth of songwriting here. “Throw Up” gives way to an encore of “Dirt Wizard” and “Prehistoric Dog”, which rather neatly lays waste to any negativity that remains regarding the Mastodon type sound.

Red Fang are no doubt aware of it and probably couldn’t care less. They are, though, very much a band on the rise.