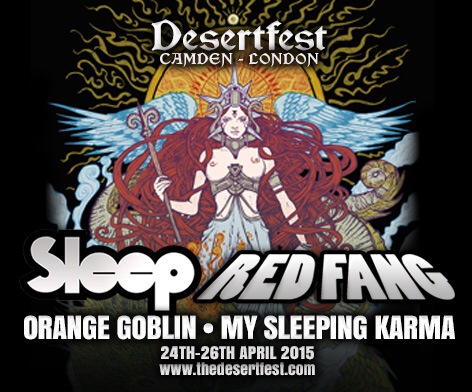 And if that’s not enough, they’ve got Orange Goblin too. Holy Smokes

They need no introduction, each one of their gigs turns into the best metal party you’ll ever have: ladies and gents, we have the immense pleasure to confirm RED FANG as second headliner of DESERTFEST LONDON 2015, which will take place on April 24-26th in Camden.

For the fourth year running, Camden will be hosting one of the most exciting stoner/doom/sludge/psyche gatherings in Europe, for a full weekend of fuzzed-out tunes, psychedelia and partying. As the first headliner of this 2015 edition, American stoner rock pioneers SLEEP will be treating the Desertfest crowd to the finest smoked-out odysseys, with an exclusive headlining set at London’s famous venue Koko.

Also headlining, Portland’s heavy rock’n’rollers RED FANG are set to turn this fourth edition into a massive metal celebration. The ground is set to tremble once again this year, with UK metal heavyweights ORANGE GOBLIN delivering their fiery metal anthems for a one-off 20th anniversary performance. It’s very rightfully than German psych foursome MY SLEEPING KARMA will be perfectly embodying the cosmic side of this first announcement.

A new batch of bands is to be announced really soon, stay tuned!