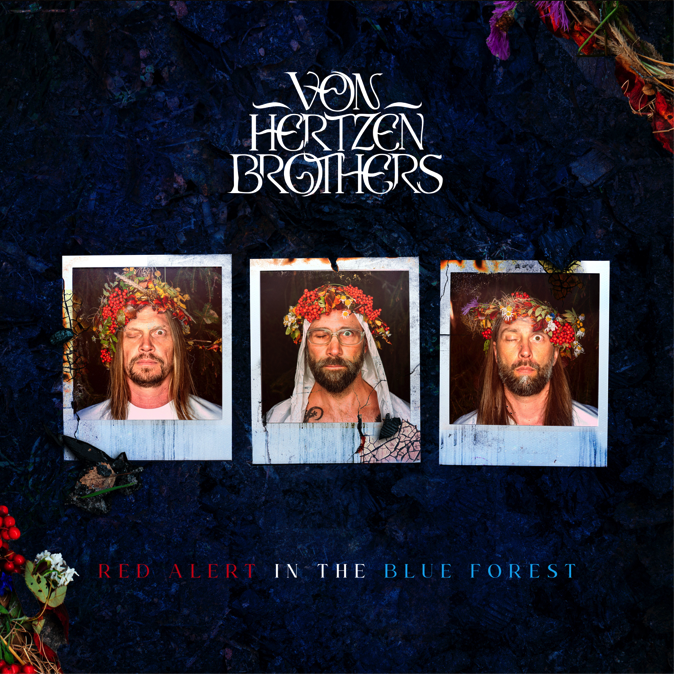 Finland’s Von Hertzen Brothers are pleased to announce the release of a forthcoming new studio album, “Red Alert in the Blue Forest”, on the 18thMarch 2022. The album will be released through Doing Being Music.

From the opening salvo of album opener “Day of Reckoning” to the moving closing track “Disappear There” this is an album that is vast in scope but intensely personal. From the ethereal guitar tones and haunting melodies of the seven-minute opus “All of a Sudden You’re Gone” to the electronic shanty feel of “Pirates of the Raseborgian”, from the instant anthem “The Promise” with its chanted chorus refrain to gentle lush waves of “Söderskär”, this album should be listened to as albums are meant to be listened to – as a body of work, a journey. The sounds, rhythms and melodies of the album reflect the brothers’ unique upbringing – both musically and personally. Weaving in the mysticism of Finnish folklore and the countryside they grew up immersed in, the album track “Northern Lights” actually features distinct and rarely heard sounds of the Aurora Borealis as captured by Professor Unto K. Laine (https://www.eurekalert.org/news-releases/847977) Musically hard to categorise, drawing on elements of rock, folk, progressive and pop, “Red Alert in the Blue Forest” is an album that is dazzling in its scope.

Mikko Von Hertzen says: “The harmony in the Blue Forest is gone. The harmony within is being challenged. We see and feel this imbalance threatening our peaceful existence every day and are reminded of the loss caused and experienced by us humans. So, how do we deal with all the loss? We see warning signs and Red Alert lights going off everywhere but still find it hard to crystallize a constructive response to these big problems. But sometimes we find ourselves experiencing or witnessing something so beautiful and special in our lives that it forces us to do everything we can to share it through our art.

These are the themes we address on our latest release. Initially, we approached this double album as three painters in a collaborative art show, all of us plunging into the creative process separately. Joint exhibitions can often feel a bit scattered and incoherent but the standstill of the pandemic gave us the time needed to merge and polish our art and, in the end, the vision of three individuals became a vision of one.”

The father of the brothers, Hasse von Hertzen, played guitar in an early sixties band called The Savages, and later in The Roosters. Their uncle Lasse von Hertzen was a member of a well-known 1970s folk band in Scandinavia, Cumulus.  So, the brothers grew up steeped in the rich musical traditions of their homeland mixed with an upbringing that saw them in and around nature (Kie’s godfather was one of the early Finnish environmentalist pioneers). This has led to their wonderful, unique world and musical vision.

Initially playing in separate bands, the brothers came together in 2000. Since forming the band they have become one of the most important and influential rock acts in their homeland, and one of the few acts to have successfully crossed into other markets in Europe and beyond. “Red Alert in the Blue Forest” is the band’s first album since 2017’s critically acclaimed “War Is Over” and the band’s eighth overall (including three No 1 albums in Finland). The band released a Greatest Hits in 2012.  “Red Alert in the Blue Forest” is an album that will see them spread their musical vision to a wider audience.

“When god made man
She knew it could be bad
To hand over her land
Her oceans, woods and air

Album pre-order will be available from 10am GMT on Wednesday 15thDecember 2021.  There will be a number of bundles and options – including a strictly limited, not reprinted, double vinyl album edition printed in red and blue with gatefold sleeve and a digipack CD.
Pre-order bundles are available to seeHERE

A stunning live act, the band have performed in 21 countries. The artists they have played with – including the likes of Foo Fighters, Neil Young and Biffy Clyro – hints at the breadth and depth of their music. The band have just announced a headline tour in Finland with European dates to be announced in 2022.

The Finnish tour dates in early 2022 are as follows

“Red Alert in the Blue Forest” will be released through Doing Being Music on the 18thMarch 2022.

Previous article
SMITH AND KOTZEN
Next article
ALL WHITE NOW