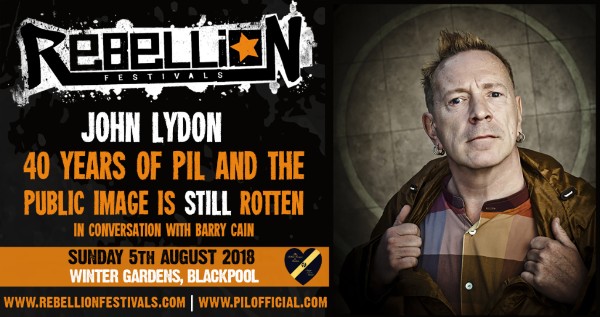 Rebellion Festival has confirmed a special live Q&A interview with legendary Sex Pistols and Public Image Limited (PiL) frontman John Lydon, scheduled to take place on Sunday August 5th at the Opera House of the Winter Gardens. The interview will be conducted by esteemed journalist Barry Cain and will focus on the bands long career as they celebrate their 40th anniversary this year.

This will be followed by a live set from the post-punk icons as Public Image Limited (PiL) close the festival on the Sunday night. It’s the band’s first appearance at the festival since 2012. Their set is guaranteed to thrill and inspire and it’s an honour to have them back.

Rebellion Festival is known and respected for bringing together the best and most vital bands from the long and varied world of punk and alternative music and reflects the very best of what the scene has to offer. Acts confirmed include Stiff Little Fingers, Buzzcocks, The Exploited, Cockney Rejects, The Adicts, Peter Hook & The Light, Idles, Michael Monroe, Angelic Upstarts, Discharge, The Vandals, Ruts DC, UK Subs, The Wildhearts, GBH, Lagwagon and Slaughter & The Dogs, joining a host of punk and hardcore bands from around the world, including legends such as D.R.I., The Adolescents, Toxic Reasons, The Stupids, Raw Power and many more. These, plus scores of new acts from around the world ensure that Rebellion Festival is still the main event when it comes to punk rock in 2018.

Many more bands, running-order and stage times still to be announced.