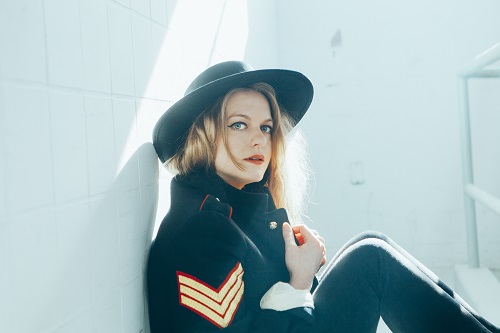 Recorded in Nashville, at Sound Emporium and other noted studios, with acclaimed producer Fred Mollin (Billy Joel, Jimmy Webb, Carly Simon, Joe Cocker, Johnny Mathis and many more) the album features Michael McDonald on the first single ‘When We Were Young’.

So, what is the substance of the album in question?

Soul. Blues. Gospel. Beatles-worthy pop. These are the core ingredients of Jo Harman’sPeople We Become, a modern album rooted in the classic, timeless music of past generations.

“I’m not trying to fit in anywhere,” admits Harman, whose super-sized voice fills the record’s 10 tracks. “I’m just trying to write classic songs, and present them with classic production. When you try to chase what’s going on at the moment, then it’s going to sound old very quickly.”

Raised in Southwest England, Harman found success on her own terms with her debut,Dirt On My Tongue. The album was released independently in 2013 and supported by a touring schedule that found Harman sharing the stage with icons like Patti Smith, Joan Baez and Sinead O’Connor. Dirt On My Tongue was embraced with particular devotion by the blues community in the U.K., with Harman racking up more than a half-dozen nominations from the British Blues Awards. Looking to expand her horizons beyond any single genre Jo began teaming up with her long-time co-write, Mike Davies, to write new songs that took

their cues from some classic artists — including Carole King, Cat Stevens and David Bowie — whose music had filled her childhood home. She wasn’t looking to be a throwback artist; instead, she was narrowing her focus to the building blocks of ageless music, from powerful melodies to organic, natural-sounding arrangements.

Released worldwide on February 3, 2017, People We Become marks the biggest leap of Harman’s career. To make it, she headed overseas to Nashville, Tennessee, where she found a trusted collaborator in producer Fred Mollin. While a winter storm raged outside, Harman and Mollin holed up inside the city’s famed Sound Emporium Studio for three weeks, focusing on a warm sound — full of upright piano, Rhodes, unaffected bursts of electric guitar, and the soulful sweep of Harman’s voice — that contrasted with the town’s snowy weather. In March Jo will return to Nashville, a fitting start to her first American tour.

Poignant and personal, tracks like “Silhouettes of You”, “Changing of the Guard”, and “Person of Interest” find Harman moving through the stages of a breakup. Heartbroken one moment, forever reminded of a relationship that’s fizzled out, and empowered the next, eager to explore what lies ahead with emboldened purpose. Other tracks cast a broader net, with the stomping, percussive Reformation taking influence from Harman’s work with Amnesty International. Backing her up are some of Nashville’s best musicians, whose contributions bounce between smoky, soulful ballads and brassy, Motown-tinged anthems.

People We Become features award-winning players Tom Bukovac, Greg Morrow, and Gordon Mote — as well as a guest appearance by Grammy winning Michael McDonald (Doobie Brothers). McDonald lends his harmony vocals to the Seventies-worthy soul of “When We Were Young”. The most striking instrument on the album is Harman’s voice, sharpened by her years on the road, and sounding better than ever.

“I’ve learned how to express myself a bit better, and to convincingly put across the stories that I’m telling,” Harman says. “It’s a natural progression. My voice has matured, in the same way that the songs have matured, and the production has matured. I’ve only ever tried to be me, and that’s what People We Become is. It’s me.”

The album will be released by Sands Foley Entertainment (SFE), distributed by Universal/Caroline, in North America, V2 BeneLux in Netherlands, France, Belgium and Luxembourg, and ‘Total Creative Freedom’, distributed by Proper Music, in the UK and the rest of the world.

For more information, go to http://joharman.com/tourdates/