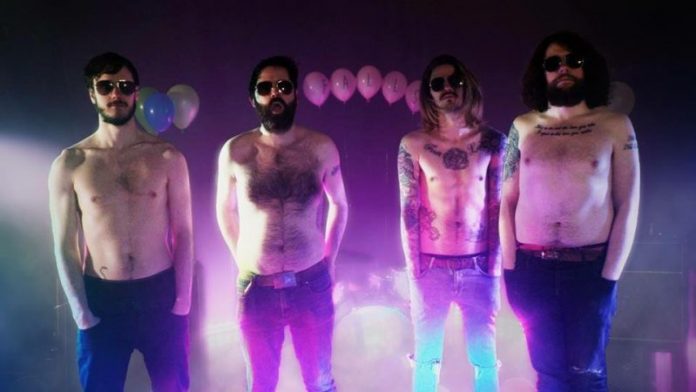 Rock n roll to get you laid……?

Self proclaimed “f*&k rockers” FALLS are set to create a frenzy, confirming the release of their brand new EP One Hundred Percent Strong on the 13th May 2016.

To coincide with the announcement the band are streaming the first single ‘Get Well Soon’, two and a half minutes of vibrant energy that would make even the most stubborn of people want to tap their foot (at the very least!)

The flamboyant four-piece will hit the road next month on a co-headline tour with I Cried Wolf,before they make an appearance at ArcTanGent.

Big hooks with intelligent songwriting and punk attitude are what FALLS do best. Infectious melodies tie together big riffs and jarring rhythms to create a sound unique to the four-piece, who are not shy of experimentation, yet their music is wholly accessible.

Since their inception in 2013, FALLS have toured the UK extensively with Allusondrugs andShikari Sound System and also shared stages with God Damn, Blacklisters, Press To MECO and Black Peaks, developing a solid and loyal fanbase. In 2015 their profile made a huge leap when the track ‘Mastiff‘ was picked up by Huw Stephens, Zane Lowe, Steve Lamacq, Alex Baker and Sophie K, setting the quartet up to prove themselves as one of the most exciting new bands the UK has to offer.