Share
Facebook
Twitter
WhatsApp
Linkedin
Email
Print
Tumblr
’Rain on the Rail’ is a song of longing, of self-sabotage and thwarted seeking, but it’s also about resolution and redemption.” That’s how Cordovas’ Joe Firstman describes the second single from the band’s upcoming album ‘Destiny Hotel‘ (out 30th October on ATO Records). Over an insistent backbeat, strutting bass, funky organ and a winding guitar/mandolin line, ‘Rain on the Rail’ captures the arc of learning Firstman describes through its wistful lyrics, while the band’s exquisite three-part harmonies help put lines like “keep on thinking I waited to try, once I wasn’t such a mess” into focus.
LISTEN TO ‘RAIN ON THE RAIL’ ON SPOTIFY AND YOUTUBE
‘Destiny Hotel’ lead single “High Feeling” – which Rolling Stone lauds as “infused with the same sun-kissed energy that powers the Allman Brothers Band’s ‘Blue Sky’, is as unhurried and amiable as it gets, featuring perky splashes of piano and bright Hammond B3 organ”. The song features additional production, guitars & mixing from the Black Pumas’ Adrian Quesada and backing vocals from the Black Pumas’ touring members Angela Miller and Lauren Cervantes.
The band continues to hone their dynamic live performance through a weekly Facebook live stream, recently moving the stream from their farm outside Nashville to the studio at Stager Microphones in Nashville. To date, the band has broadcast 68 sessions since going into self-quarantine in March, regularly performing on their Facebook page on Thursday and Saturday at 2AM BST, and Friday at 8PM BST.
‘Destiny Hotel‘ is a work of wild poetry and wide-eyed abandon, set to a glorious collision of folk and country and groove-heavy rock-and-roll. In a major creative milestone for the Tennessee-based band—vocalist/multi-instrumentalist Firstman, keyboardist Sevans Henderson, guitarist/vocalist Lucca Soria and vocalist/multi-instrumentalist Toby Weaver—the album harnesses the freewheeling energy of their live show more fully than ever, all while lifting their songwriting to a whole new level of sophistication. The result is a batch of songs that ruminate and rhapsodize with equal intensity, inviting endless celebration on the way to transcendence.
Recorded in Los Angeles and produced by Rick Parker (Lord Huron, Beck, Black Rebel Motorcycle Club, Firstman’s Atlantic Records-released debut solo album The War of Women), Destiny Hotel expands on the harmony-soaked roots rock of That Santa Fe Channel, a 2018 release that earned abundant praise from outlets like Rolling Stone and NPR Music. Before heading to L.A., Cordovas spent over three months in their second home base of Todos Santos (an artist community in Mexico’s Baja California Peninsula), sketching dozens of songs partly sparked from their voracious reading of authors like mythologist Joseph Campbell, poet/novelist Rainer Maria Rilke, and spiritual teacher Eckhart Tolle. And when it came time for the recording sessions—a frenetic seven-day stretch squeezed in just before stay-at-home orders took effect in response to the global pandemic—the band methodically eliminated any lyrics they deemed inconsequential.
“We wanted to strike the term ‘want’ from our music—to get rid of all the ‘Baby, baby, baby, I want this, I want that,’ and create something more useful,” says Firstman. “We needed to make sure these were songs we’d be proud to sing forever.”
www.cordovasband.com
www.instagram.com/cordovasband
https://www.facebook.com/cordovasband/
https://twitter.com/CORDOVASBAND
http://rekroommedia.com/cordovasdestinyhotel 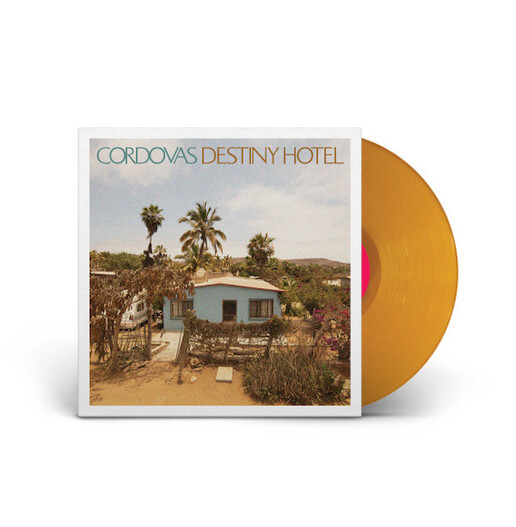