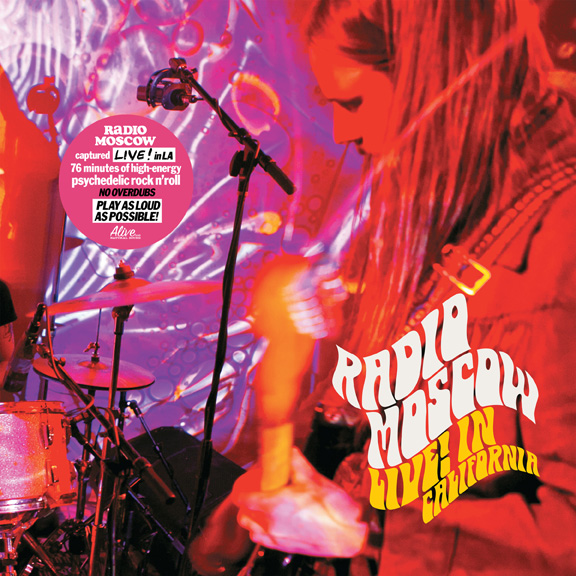 Radio Moscow‘s new double LP Live! In California was recorded absolutely live (no overdubs) over two nights at The Satellite club in Los Angeles in December 2015. The album features 76 minutes of the trio’s unique brand of high-energy psychedelic rock’n’roll. The material is pulled from all their studio albums and the songs feature new arrangements.

Radio Moscow is Parker Griggs on guitar and vocals, Anthony Meier on bass and Paul Marrone on drums. Now based in San Diego, CA, the band has five albums out, all on Alive Records, including their self-titled debut produced by Dan Auerbach (2007);Brain Cycles (2009); The Great Escape of Leslie Magnafuzz (2011); 3&3 Quarters – early demos (2012) and Magical Dirt (2014). The trio have toured the U.S. and Europe with acts like Graveyard, Witchcraft, Joe Bonamassa, Pentagram, Sheepdogs and Nebula, and have shared the main stage at the Psycho California festival with Kylesa and Earth, along with performing in Europe, South America and Australia. Following their upcoming U.S. tour dates (which includes a headlining slot at Denver’s Electric Funeral Fest in June, and playing at the Ride Festival with Pearl Jam in July), they’ll also be touring extensively in Europe this summer.