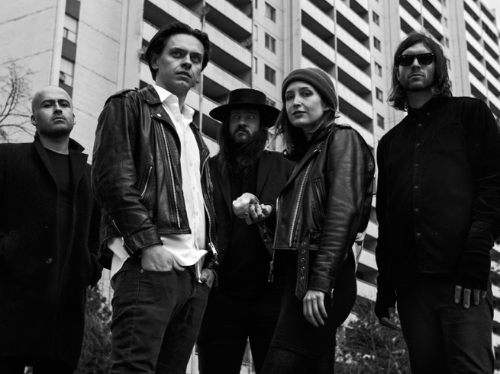 Canadian’s premiere first single ahead of September release
Canadian alt-blues-rock outfit July Talk have announced the release of their second album Touch and a UK and European tour to coincide. The follow-up to their critically acclaimed self-titled debut, Touch will be released on September 9th via Polydor Records in the UK.

The first single from the album is the brilliantly sinister ‘Push + Pull’, accompanied by a truly striking video. Directed by Nadia Tan (Bry Webb, Arkells, Ohbijou), produced by lead singer Peter Dreimanis and choreographed by co-vocalist Leah Fay, it premiered on Billboard last Friday and is also available to post and share.

“When July Talk first approached me to make a music video for ‘Push + Pull’, I had a long phone conversation with Pete about the meaning of the song. He told me it was about Western excess, about our never-ending appetite, about the types of people who consume and consume and don’t know when to stop, about our irrational but constant need for more food, more mind-altering substances, more sex, more ‘likes’, more money, more things,” says director, Nadia Tan. “I thought it would be interesting to try to capture these themes in the video through raw documentary-style footage showing various groups of people partaking in excess in different ways across North America over the course of one night.”

Known for their provocative and prolific videos (over 6 million Youtube views and counting), the video for ‘Push + Pull’ precisely aligns with the band’s longstanding aesthetic of black and white imagery.

July Talk’s new album TOUCH is a gloriously emotive and stirring collection. The universally relatable themes of human connection weighed heavily on the band during its creation. “It seems to get easier every day to disconnect from the people around you,”Dreimanis observes. “Leah and I started to see human touch as this pure thing—this antidote to a world that had become obsessed with mirrors and screens. We became fascinated with that moment where two bodies can actually touch and experience each other honestly.”

This summer, July Talk will play select festivals in Canada and the U.S. including; Field Trip (Toronto), Festival D’ete (Quebec) and Osheaga (Montreal) and will be heading out on a European headline tour in September including shows in Glasgow, Manchester and London. Further updates on the new album will be announced soon.