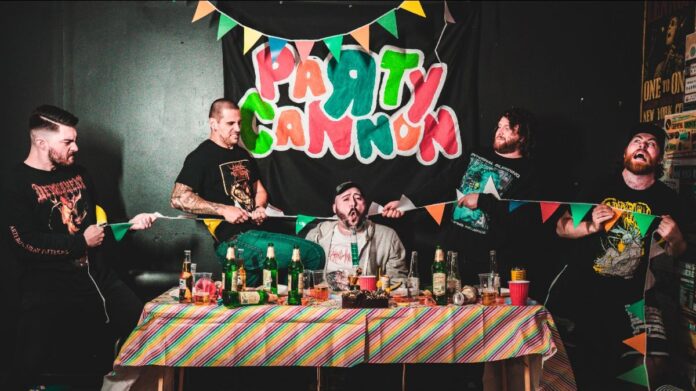 Scottish party-slam legends (and stuff of nightmares) Party Cannon are a band that never run out of ideas. Selling themselves as conceptually idiotic, musically gifted, legends of partying, and the band with the best logo in death metal, they’ve decided that what was missing from the world of death metal playthroughs was in fact….cats.

Ahead of their new album Volumes Of Vomit, set for release 14th January via Gore House Productions,the band ventured to the inner bowels of Scotland’s capital city, Edinburgh, to the infamous Maison De Moggy and in-line with Scottish COVID guidance filmed this bass and guitar playthrough for their first single ‘Nauseating and Unpalatable’.

Premiered via Slam Worldwide you can watch it here: https://youtu.be/PmjehRgbv4c

Comments cat fanatic and bassist Clankenstein, “We were looking for ways to make a bunch of guys sitting around playing guitar more fun to watch and there is literally nothing more entertaining than a large number of luxury cats, so it was a no brainer. It is also a fact that guttural riffs are good for cats and their health, there is no scientific evidence for this but it’s a fact. The idea of filming in the cat cafe came to me after seeing a nude calendar that was shot in the cafe. Huge thanks to everyone at Maison De Moggy in Edinburgh for being so cool and accommodating!”

A spokescat for Maison De Moggy commented on working with the band, “Miaow, purrrrr purrrr miaow.”

Forthcoming album Volumes Of Vomit offers up nine chunks of IQ-lowering, slamming sickness, mass-gaining gym riffs, irresponsibly fast blastbeats, and the swampiest gutturals known to mankind and in true Party Cannon over-the-top style, is not your normal death metal album. This is fully fledged party slam at its most unhinged.

Produced by Jörg Uken (Defeated Sanity, Sinister, Anvil, Despondency) at Soundlodge Studios, Volumes Of Vomit delivers the most brutal sound of the band’s career. Raw, live and crushing, you’ll feel like you’re actually in the room with these terrible people – who brought in their well-known guttural friends Ross Sewage (Exhumed), Don Campan (Waking The Cadaver) and Andrew Lomastro (Cerebral Incubation) to assist in the madness.

The album cover and sleeve collages were handled by Jan Grotle ofFLUIDS and Cochino Art.

Hailing from Dunfermline, Scotland and signed to Gore House Productions, Party Cannon have subjected a large portion of the planet to their partying having frequently toured the UK, Europe, North America and Asia. Making waves since their inception in 2010, their debut EP Partied In Half is now considered an iconic release within the slam death metal scene.

Famously, Party Cannon‘s multicolour party balloon not only stands out against frosty-branched-logo-bands wherever it appears on gig posters, but regularly pops up globally. Make no mistake, Party Cannon know how to stand out.