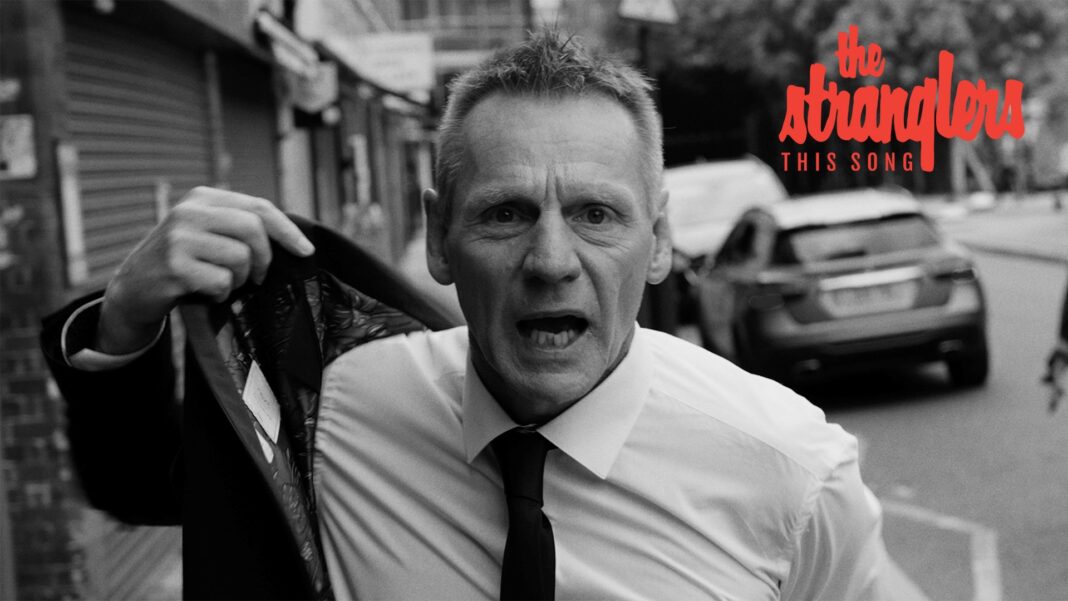 The visual for ‘This Song’ follows Pearce in action mode, being chased through streets and leaping over ledges through a monochromatic London. Pearce has often cited the Stranglers as one of his favourite bands, having seen them play live over 300 times.

On the making of the video, Pearce says: “When the Stranglers make you an offer you can’t refuse… you can’t refuse! I played it cool but to be honest I was excited, and honoured to be asked. As a lifelong fan of the Stranglers, being part of this video was very special. ‘This Song’ is the Stranglers at their best, a really catchy song full of all the classic traits of the band. We had a lot of fun filming, my demons (the parkour boys) were fantastic and the crew were top quality.”

Talking about the upcoming album Dark Matters, Pearce adds: “It’s a fitting tribute to Dave Greenfield who will be missed by everyone. I’m sure I speak for all Stranglers fans by saying we can’t wait to see the boys touring again.”

Although lyrically the song is packed with emotion, Baz Warne’s vocals add a real attitude to the track that director Jamie Wanstall (Praxima Films) wanted to reflect:

“The lyrics drove this idea that we can sometimes be trying to escape feelings and emotions that actually we need to confront head on. This led me down a route in which we could mix parkour action with a Bond-like performance from Stuart. I wanted Stuart to perform as if he was giving a half-time team talk to his team that had just conceded before the break… Luckily for us, that actually happened to West Ham the day before, so that emotion was fresh in his memory.”

‘This Song’ follows previous Stranglers’ releases this year: the emotional tribute ‘…And If You Should See Dave’, the thought-provoking ‘The Lines’, and recent electro-pop single ‘If Something’s Gonna Kill Me (It Might As Well Be Love)’.

Go behind-the-scenes of the making of the album, in The Stranglers video ‘Track Chat’ series – watch here.

First formed in 1974, The Stranglers no bull***t attitude was embraced by the punk movement of the late 70s.  But their musicianship and menace transcended the genre, creating a sound unique to themselves.  With their first three albums (Rattus Norvegicus, No More Heroes and Black and White) being released within an astonishing 13 months of each other, scoring hit singles with ‘Peaches’, ‘No More Heroes’ and ‘Walk On By’. Further success was to follow with ‘Always The Sun’, ‘Strange Little Girl’ and the mercurial ‘Golden Brown’, amongst many others, earning the group 24 Top 40 singles and 18 Top 40 albums in a career spanning six different decades.

Surviving Stranglers band members, JJ and Baz, completed new album Dark Matters remotely during lockdowns, making it their first record since 2012. Adding to it a fitting tribute in ‘And If You Should See Dave…’, the first single from the album – a contemplative but uplifting dose of sixties sunshine-drenched rock.

Keyboard player Dave Greenfield tragically passed away in 2020 from Covid-19, but still features on 8 of the 11 tracks, which were made over the course of two years at the band’s studios in the rural idylls of Somerset, and in Southern France, produced by long-time collaborator Louie Nicastro.

Dark Matters is out on 10th September 2021 on the band’s own Coursegood imprint, via Absolute. All pre-orders for the album, on any format, through the official store will receive a special bonus CD titled ‘Dave Greenfield – A Tribute’, featuring 8 unreleased live recordings selected by the surviving members with a view to celebrating Dave’s unique talent. Pre-order Dark Matters on https://stranglers.tmstor.es/

The Stranglers announced their ‘full final tour’ of the UK and Europe and have decided to proceed with the 47-date run which includes two sold out performances at Brixton Academy, in Dave’s memory. For full tour details and more information visit www.thestranglers.co.uk