Profane And The Sacred Are A Long Time Coming! 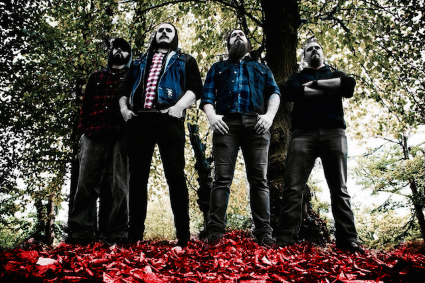 When a band reckons their debut record is one: “Featuring gigantic doom laden riffs that unashamedly smother you in nostalgia but waste no time in lacing prog tinged instrumental breakdowns into a 9 song musical journey. Showcasing time progressions that shift gears but never let up on the momentum – allowing the rapsy, gritty vocals of singer Luke Alleeson to cover the organic soundtrack.” you qill forgive us for being a bit cynical.

Then we heard “From The Top” the first single from Profane And The Sacred.

So good is “From The Top” that we are prepared to believe the claims that ‘A Long Time Coming’ is an album specifically recorded to sound alive and not manipulated to the point of sounding ‘cookie cut’ –  the warm acoustic notes of album opener ‘Bench’ gives way to down tuned riffing with ‘Bleed That Stone’ and ‘You Know’ demonstrating the armoury of this band. Lead single ‘From The Top’ showcases Profane And The Sacred in a 5 minute classic stoner rock track.

It really, really is.

The subtle tones of closer ‘A New Leaf’ captures the melodic side, with keyboards, acoustic and bass complimenting each other in this instrumental piece, leaving the listener in a soothing,  melancholy reflective mood.

Profane And The Sacred will release a new sinelge/music video ‘Words’ in February.

Profane And The Sacred are: