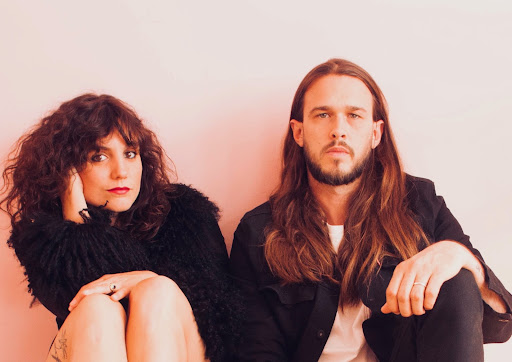 “When I was a Poster Girl in 1984, you tore me from your magazine and pinned me to your wall” lulls Sarah Gotley, seemingly adrift in the bittersweet reflections of another lifetime.
A twisting ballad that touches on the fickle promises of fame, the fight for feminist rights and finding your own way through life, “Poster Girl” is the story of a shining star who’s unafraid to stand her ground.
As Blue Violet guitarist Sam Gotley elaborates of the track:
“”Poster Girl” is a song about fighting back. The character it centers around resists objectification, defends herself from evil and keeps whatever company she sees fit – in the chorus she finds herself the leader of a group of drunken sailors that accompany her on her voyage… As the writing process went on we felt that a dystopian, Orwellian setting was perfect for the female protagonist: weary traveller, fighter, lover & saviour all rolled into one.”
With shades of Slowdive or Sigur Ros‘ subtly-epic sonic masteries to Mazzy Star‘s brittle heartbreakers, “Poster Girl” finds the Anglo-Scottish duo of Sam & Sarah Gotley in perfect synchronicity as they pair lush arrangements to a narrative straight out of Hollywood biopic.
“Walk on the Wild Side by Lou Reed definitely worked its way into the fabric of this one” adds Sam, “but we also wanted to give it an anthemic feel. We layered a lot of guitars & synths and have two drum kits playing at the end, giving a feel that the world is kind of collapsing around you.”Written in 2019 as Blue Violet found themselves well-into the throes of recording sessions for a full album with legendary producer Rob Ellis (PJ Harvey, Bat For Lashes), the track emerged as a standout from a clutch of new demos the band recorded during a particularly prolific creative spell. With pre-production perfected at Peter Gabriel’s Real World Studios, “Poster Girl”‘s swelling riff and lyrical narrative soon began to fall into place. With the final version recorded with Ellis, “Poster Girl” was mastered by Mount Olympia Mastering, engineered by Peter Miles and mixed by TJ Allen.

* * * *
Blue Violet are husband and wife duo: Sam & Sarah Gotley. Previously performing under the guise Broken Bones Matilda, the pair put-in noteworthy performances at Glastonbury, Belladrum, Pub in the Park, Carfest and Wilderness festivals to name a few before regrouping to form Blue Violet. Sarah, a Scot with Parisian roots, teamed up with Sam a few years ago and between then and now the duo have lived between London and Sarah’s childhood home in Argyll, where they have been busy writing their next chapter.
In November 2019, the alternative-pop pairing spent a month at Middle Farm Studios in Devon recording what would become their upcoming debut album with producer Rob Ellis (Anna Calvi, Marianne Faithful, PJ Harvey), with its spoils just beginning to see the light of day this year.
Setting out their stall with a series of sublime cover versions including “A Girl Like You” (Edwyn Collins) and “All I Have To Do Is Dream” (The Everly Brothers), the duo made their mark in 2021 with sublime debut single “Undercover”. Earning ‘track of the week’ on BBC Scotland‘s Afternoon Show and praise from BBC Introducing; Blue Violet’s first original music saw them championed as being like the ‘Civil Wars meets the Black Keys’.
Releasing “White Beaches” over the summer, the swelling shoegaze-tipped second single received airplay on BBC 6 Music (Steve Lamacq) and was praised as “a hypnotic gem of wistful pop that creeps out of its shell in a mesmerising way” (Vinyl Chapters). Inspired by the causes of Greta Thunberg and Surfers for Sewage, it was a timely and universal rallying cry for the protection of our planet.
Showing-off a side indebted to seventies soft-rock masters like Fleetwood Mac and The Mamas & The Papas, the pair rounded-off 2021 with the emphatic “Asylum”, a track that blurred fantasy and poetry as it stepped into the shoes of two protagonists outcast from society for their so-called insanity.
With such singles already proving their talents for mastering diverse themes and complex narratives, fans can expect intricately crafted, genre-crossing songs of beauty and heartbreak, love and salvation when their debut LP ‘Late Night Calls’ arrives in April 2022.
Catch the band at the following live fixtures this year:
BLUE VIOLET – LIVE DATES
Friday February 25th – Troubadour, London
Friday March 18th – Exchange, Bristol