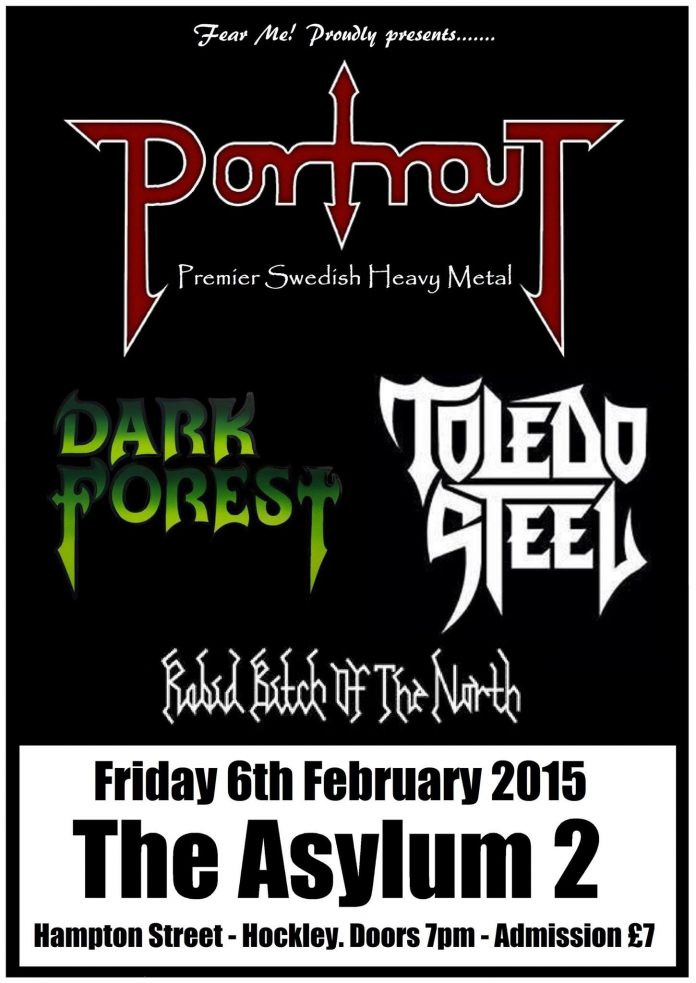 Back patches on, horns up, it’s trad metal heaven in Brum

Northern Ireland’s Rabid Bitch Of The North are so steeped in classic metal their debut EP has emerged on tape. The sound matches that bygone age too. Opener “Your Misery” is heavy fun, “Defending Two Castles” and forthcoming single (that ones coming out on vinyl, naturally) “Green Eyes” match it for explosiveness. To say that this band sounds like Iron Maiden is almost a given, but then couple that with the thought of Rob Halford was singing “Painkiller” with his balls in a vice and you’d be close to what RBOTN’s Joe McDonnell sounds like, the frontman behind “Trapped In 1999” by explaining that their sound is to rebel against the crap that came out in the 1990s, we’d suggest that they belong about 20 years earlier. By last song “Us Against Them” MVM is lining up to fight on their side. All gigs should start like this.

South Coast five piece Toledo Steel are up next. They add intricate solos to the brew. But they begin with a similar backs to the wall effort that RBOTM concluded with. “It’s time to fight or die” screams singer Rich Rutter. Something tells you that, rather like Manowar, they want to fight for metal, but they’ll fight just the same. Their second tune is eponymous, and is gonna get alllll of youuuuu (probably) while “City Lights” just sounds like early Maiden, and when you name a song “Speed Killer” you only want it to go one way. They began with sprint, and end with the gallop of “Black Widow” and this is glorious twin guitar stuff. A sound that’s hard to get wrong, perhaps. But it’s harder still to get it as right as this.

Dark Forest claim they are heavy metal music from the wood. More like the Black Country, but we’ll go with it. They have been at this type of thing for a pretty long time, and songs like “Light Years On” give a hint of real class. This, like the previous two bands, is very much traditional heavy metal. But it isn’t quite as high pitched as RBOTN, nor as fast as Toledo Steel, they have a Power Metal feel, yes, but with a large dollop of Saxon too. A new one gets aired and “Where The Arrow Falls” augers well for the upcoming record. There’s some old stuff before the end – and unfortunately it’s an end which they don’t appear to realise is upon them. Give or take an abrupt conclusion Dark Forest were excellent as always.

Whatever else happens, Sweden’s Portrait know how to make an entrance. The band walks through the crowd, plugs in, and begins a mighty opening riff. Following a couple of minutes later is singer Per Lengstedt, cutting a formidable figure dressed in his leathers. This line-up of Portrait has been together for a couple of years and released the mighty metal tour-de-force “Crossroads” last spring. Here for their first ever full UK tour, they emerge as if they’ve waited all their lives for it. By the time they’ve launched into second song “We Were Not Alone” heads are banging, fists are pumping, and all is well in the land of metal.

Absolutely steeped in the classic sound, and bringing to mind Mercyful Fate, the five piece are obviously delighted to be in this City: “Finally we are here!” Yells Per at the first chance he gets. And more than most, you’d guess he means it.

It’s all present and correct. Gallops, solos, screams, high pitched singing, summoning the Dark Lord from on low. Actually it’s all encapsulated in one song. The magnificent “Welcome To My Funeral” seems to distill all of this and handily package it into one five minute nugget. “Blessed To Be Cursed” which follows (and came out late last year), is perhaps Portrait’s heaviest song but no less thrilling. And the last song, the title track on the last album, is ebullience made (very) loud.

A special night, you’d think, for all concerned, means they afford themselves an encore, which concludes with “Beware The Demons” and a sound so evil that it could curdle the blood.

Every so often some clown likes to tell you metal is dead and what survives must be fragmented into sub genres no one understands. Nights like tonight take that idea and shoves it where the studded belts don’t shine. Metal is dead? Not a chance in hell!