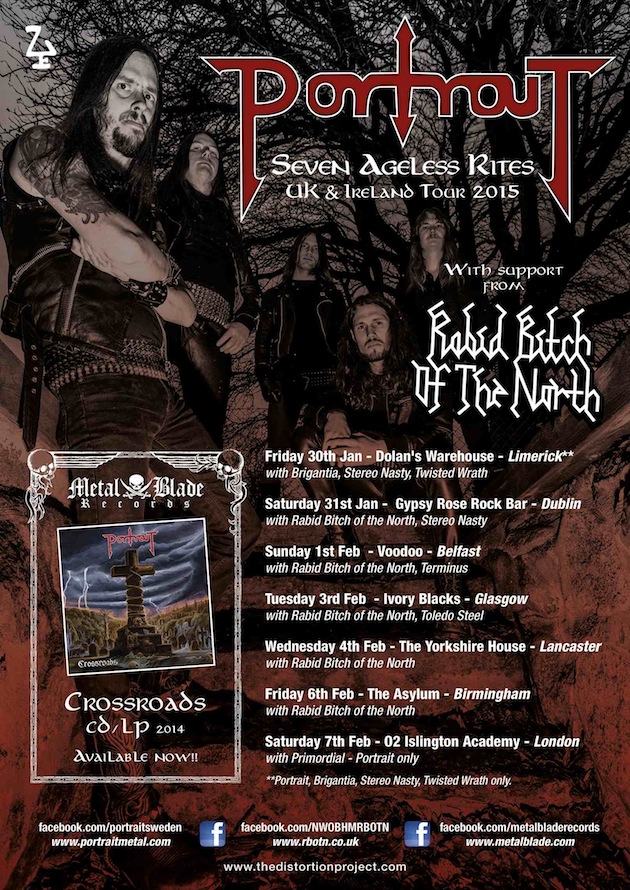 Well you would, wouldn’t you? Plus split with RAM out now

PORTRAIT recently announced a seven date tour of the UK and Ireland, in support of their recent, critically acclaimed third album “Crossroads”. As there London date was going to clash with PRIMORDIAL’s show the same night the Swede’s have now been added to that show at Islington Academy on February 2, 2015.

Commencing in early 2015, the band will lay waste to venues the length and breadth of the country in a blaze of twin-guitar fuelled metal mayhem! Entitled “Seven Ageless Rites UK and Ireland” these shows will see PORTRAIT take their brand glorious, galloping, honest Heavy Metal to a whole new audience, and ensure that their reputation for delivering the goods in fine style will be cemented, and indeed enhanced, in the hearts and minds of UK and Irish metal fans nationwide!

Support on this tour comes in the form of Northern Ireland’s RABID BITCH OF THE NORTH.

In support of these dates and the “Crossroads” album, the band have just released a split album entitled “Under Command” on Metal Blade, together with brothers-in-arms RAM. Consisting of six songs (three from each band), the three PORTRAIT songs on offer will feature an exclusive, brand-new tune entitled “Martial Lead”, a cover of the RAM song “Blessed to be Cursed” and the bands unique take on the classic Exciter song “Aggressor”!

Surf over to the landing page at metalblade.com/undercommand to check out RAM’s version of “Welcome To My Funeral”, originally performed by PORTRAIT. At the same location you can pre-order your copy of the split which will be available on CD and vinyl in different colours. There is also a shape available!