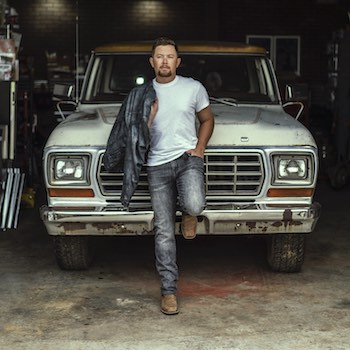 Written by Trent Tomlinson and Jim Collins, “Damn Strait” cannily honours country music icon George Strait, even as the singer bemoans the loss of his lover, associating Strait’s songs with her since they were the couple’s favourites.

“Every now and then you hear a song that sounds so much like you,” recalls McCreery. “I grew up as a huge George Strait fan, and when I heard this song, I raised my hand to say, ‘I want this one.’ Every country fan has a George Strait story, and everyone has a memory attached to their favorite songs.”

McCreery goes on to say, “The first country music concert I ever went to was George Strait, Reba and Lee Ann Womack. When I saw that show, I said, ‘I’m gonna do that one day.'”

Set to perform the song on NBC’s “TODAY” next Tuesday, Sept. 21st, during the third hour, McCreery’s rich baritone strings together titles of Strait’s songs to tell the story:

Additionally, McCreery has been announced as a main stage performer at the upcoming C2C Festival next year, playing arenas in London, Glasgow, and Dublin – full dates below:

He will also be performing an exclusive session on this week’s The Country Show with Bob Harris on BBC Radio 2, this Thursday (16/9) from 9pm BST.

Lead single “You Time” continues to climb the charts at US Country radio and is currently at No. 4 on both the Billboard and Country Aircheck/Mediabase radio charts, while Billboard boasts, “The first single from his forthcoming album bodes well for his streak of three back-to-back No. 1s to continue.”

The title track “Same Truck,” co-written with Ashley Gorley, Zack Crowell and Taylor Phillips, landed on ET‘s “New Music Releases” and found praise from MusicRow as “celebratory,” while “the ringing guitars back an anthemic lyric of unity and brotherhood…Well written and performed with elan.”

Once again produced by Frank Rogers, Derek Wells and Aaron Eshuis, the team who produced his previous project (the RIAA Gold certified Seasons Change), Same Truck is a reflection of where McCreery is in life now as a 27-year-old man married to the love of his life for three years and who is also celebrating his 10th year as an entertainer. A limited edition, alternate cover for the album is available exclusively at McCreery’s online store, along with Same Truck-themed merchandise and more.

In the midst of his You Time Tour, McCreery has been performing several songs from the new album in concert. “You never know how new songs are going to go over in the live show, but our audiences sure seem to enjoy them from the reaction we’re receiving,” said the North Carolina native. He’s also been direct support on select tour dates with Old Dominion.