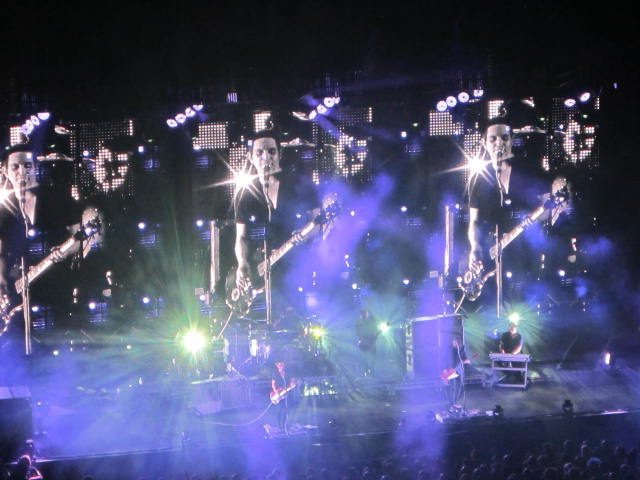 Placebo’s twentieth doesn’t really do it for Damian

I first saw Placebo in Birmingham at the Jug of Ale in Moseley, then again at the Hummingbird a few years later and a couple of times, mid bill, at festivals so I was looking forward to seeing their progression to the Barclaycard Arena. This tour was planned to celebrate the twentieth anniversary of their self-titled debut album, with fans having selected a good chunk of what was to be played via social media.

The lights dim and we are presented with a picture of Leonard Cohen either side of the stage. One a young version and the other a more recent snap, while his song “Who By Fire” is played. Straight after a further screen appears behind the drum kit and we are shown the casino video for the Placebo song “Every Me Every You” followed by shots of the band over the years in a countdown to present day and the groups anticipated arrival.

The band, who are now really a core of Brian Molko and Stefan Olsdal accompanied by touring musicians Matt Lunn (drums), Bill Lloyd (bass and piano ), Nick Gavrilovic (guitar and keyboards) and Fiona Brice (violin) enter stage left and power into the classic “Pure Morning” to an estatic audience. Up-tempo numbers “Loud Like Love” and recent release “Jusus` Son” are shared before a more reflective “Soul Mates” and “Special Needs” are played.

“Lazarus” and “Too Many Friends” follow before we get a more downbeat phase with “Twenty Years”,    “I Know”, “Devil In The Details”, “Space Monkey”, “Exit Wounds” and “Protect Me From What I Want” before a video showing David Bowie laughing and strumming with the band as the boys play “Without You I Am Nothing”. This, as Brian was at pains to point out, was their melancholic section of the show. That may have been, but a slowed down version of the brilliant “36 Degrees”, “Lady Of The Flowers”, “For What It`s Worth” and “Slave To The Wage” didn`t seem to raise up the spirits in my opinion.

The set was closed out with more lively songs in the shape of “Special K”, “Song To Say Goodbye” and “The Bitter End”.

A brief lull before the band returned to play the encore which comprised of a slowed down version of “Teenage Angst”, the wonderful “Nancy Boy” which sent the audience frantic and “ Infra-Red.” We got a further short pause before the final song of the night was performed. A cover of the Kate Bush classic “Running Up That Hill.” This concluded a performance of close to two hours.

I can`t really put my finger on why this show just didn`t do it for me, maybe I was expecting too much. I don`t really know. The stage graphics, lighting and musicianship was excellent but there just seemed to be something missing. It wouldn`t prevent me from going to see them again and the other 5500 participants seemed to revel in the night. Maybe as the song says “Protect me from what I want”, tonight, sadly, they seemed to.