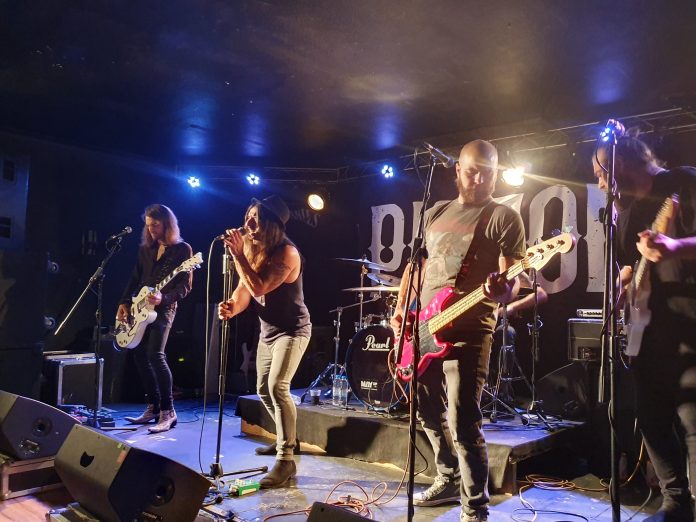 It’s one of those terms that means everything and nothing all at once.

The point I am making here is that you could stick 20 people in a room in they’d all have a different definition of what it represents to be one.

What they probably could settle on, in fairness, is that Angelo Tristan is a rock star. Friday night, in a scruffy part of town and the room above a recording studio isn’t packed – there is no point in saying otherwise – but Tristan has been dreaming of being the singer in a rock n roll band since he was a kid, and he’s not going to let such things derail him from this destiny.

Last years stellar “4 Shots” EP was good enough to offer hope that they were a little more than the rising stars, “Going With The Wind” for example is classy, and the acoustic touches give them a depth. But the ones they play that were not on the EP are interesting too, because stuff like “Won’t Stop Me Dreaming” and “About This Boy” (it literally is, given that it about the singer himself) carry on in the same vein and show a) that the EP wasn’t a fluke and b) that the new album next year could well do something.

We do also have to be honest here and say that Collateral sound a hell of a lot like Bon Jovi. The brilliant solo that Todd Winger plays in “Just Waiting For You” owes much to “Dry County”, and its not the only one. This would be a problem if they weren’t happy to admit it. That they choose to cover “You Give Love A Bad Name” rather suggests they embrace it.

Ending the set with “Midnight Queen” – the one that first got them noticed – would usually be enough, but remember, these are rock stars, right? And rock stars do encores, so “Lullaby” gets played.

They may never get to play Wembley, who knows? But that kind of doesn’t matter, because every gig is in a stadium as far as Collateral are concerned. 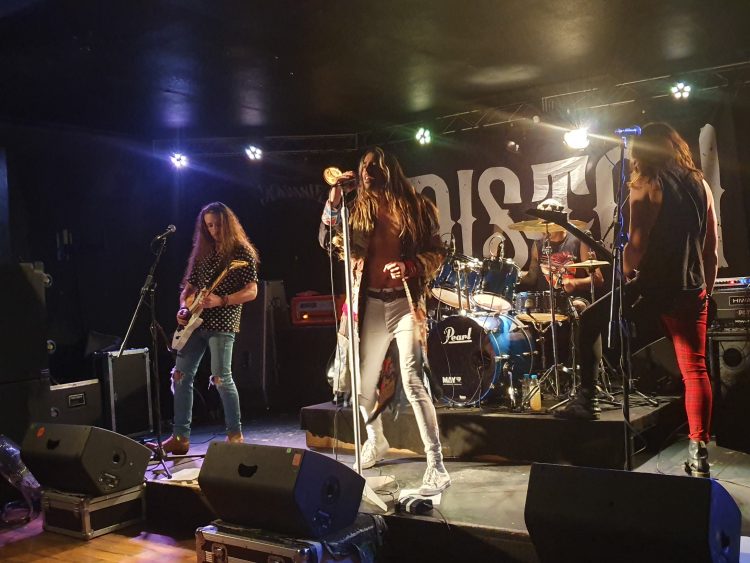 Piston have less of a “show” about them, but just like the band before them, the local boys have a collection of fine songs that are getting them noticed as ones to watch. Unlike Collateral, the quintet do have a brand-new album. Their just released debut has had stellar reviews everywhere, (not least from MV) and they are here tonight to play most of it.

Helpfully, they begin at the beginning. “Dynamite” – its lead track – is here too, and its other standout moments (and to be fair, everywhere you look on this record there is a standout moment) including “Rainmaker”, “Go Now” and “One More Day” are all here.

An elongated “Leave If You Dare” gives Jack Edwards a chance to show his talents in a solo before the song itself swaggers and they end the last track on the album “Into The Night” almost dares you to try and stop their rise.

There is one song after that – it isn’t really an encore Piston aren’t that kind of band – but it has always finished their gigs when I’ve seen them. “Proud Mary” is delivered with a passion and a skill, and singer Rob Angelico seems to really enjoy that one. And that, together with the other cover they play, AC/DC’s “Gone Shootin’” is a neat handle on where the bands sound is. Somewhere between the two.

Earlier today it was announced that Piston were to support Glenn Hughes on his Autumn tour and you sense it is the chance they need to get seen by a new audience. The talent is there, so are the songs, but also the experience. These are not a “new” band in the conventional sense. They’ve been playing for years. But this is their time, perhaps, and Piston seem ready.