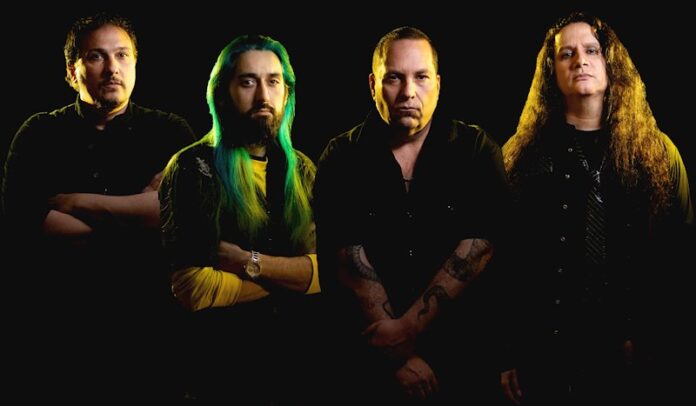 Set for release through M-Theory Audio www.m-theoryaudio.com on July 29th, ‘Cold World+‘ will be a specially expanded album length CD edition of the band’s recent digital ‘Cold World EP’ – their first new music in over 20 years. Additional bonus tracks will include the self-released 2001 EP ‘Saves,’ four previously unreleased demo tracks from 1999 and 2021, and “Exhume Her,” the band’s contribution to Metal Blade’s 1995 compilation, ‘Metal Massacre XII.’ The jewel case CD features a full-color booklet containing lyrics and liner notes.
“It’s been a long road to get some new music out and everybody is excited with the CD release,” claims guitarist Jeff McManus. “Great that it’s going to get heard by more people out there.“

The mix of old and new material on ‘Cold World+’ is a re-introduction to the band following their lengthy hiatus. The re-energized sound of the recent ‘Cold World’ EP sits comfortably alongside the intensity of the 2001 ‘Saves’ EP, while 1995’s ‘Exhume Her’ and the demo tracks add a suitable element of rawness. Together, all combine to show how the PIST.ON sound has evolved but still retains its uniqueness.

The ‘Cold World’ EP re-ignited interest in the band, leading Sentinel Daily Australia to remark, that it’s “an unapologetic strike straight at the heart of what made the band worth taking note of in the first place“.

The EP was recorded at Flatline Audio, Denver, CO and produced, mixed and mastered by Dave Otero (Allegaeon, Cattle Decapitation, Khemmis).
Frontman and guitarist Henry Font previously stated that, “We’re extremely happy with the work Dave Otero has done. He’s modernised our sound and brought a fresh dimension to the band. This feels like where we would have ended up had we continued writing and recording over the years. We’ve moved on from being gloomy miserable to being happy miserable”.

PIST.ON is built around the core line up who recorded 1999’s ‘$ell Out’ album, with Henry Font (vocals/guitar), Burton Gans (guitar) and Jeff McManus (drums) together with new bass guitarist Jack Hanley.

‘Cold World+’ is available for pre-order now, on CD at www.smarturl.com/piston and digitally on all major channels.

PIST.ON have released two albums – ‘Number One’ through Fierce Recordings/Atlantic Records in 1996 and ‘$ell Out’ through Mayhem/Music for Nations in 1999. In addition the band released the independent ‘Saves’ EP in 2001.
The band was birthed out of the same early 1990’s Brooklyn heavy metal scene that gave rise to seminal acts of the time such as Type O Negative and Life of Agony. The group’s blend of down-tuned groove-metal riffs, alternative-metal songwriting, and gothic aura saw them gain a fanatical following within the scene, attracting the attention of Type O Negative keyboardist/producer Josh Silver. Two demos – the latter of which was produced by Silver – and incredible live performances soon followed, culminating in the release of PIST.ON’s 1996 debut record, ‘Number One.’
Subsequent touring alongside Type O Negative and Marilyn Manson saw PIST.ON further build their reputation as an exciting act on the rise, attracting the attention of Atlantic Records who re-released ‘Number One’ a short time later. Further touring alongside bands as diverse as Korn, Clutch, Fu Manchu, and Queensryche saw the band continue to gain new fans. PIST.ON released their 1999 follow-up, ‘$ell Out’, on Mayhem Records. More live shows and the band’s self-released 2001 ‘Saves’ EP followed.
PIST.ON decided to take time out from the business in 2001. Though never officially splitting up, the intended short break turned in to an unplanned hiatus lasting more than fifteen years. In 2017 the group eased their way back as a band and started working on new music.
The band made their live return in 2018 with appearances at high-profile European festivals Sweden Rock and Graspop Metal Meeting followed by shows in the USA. In 2019 the band completed a short UK tour.
The advent of the Covid pandemic in 2020 put a restriction on all activities, which has led the band to adopt a cautious approach to future plans.