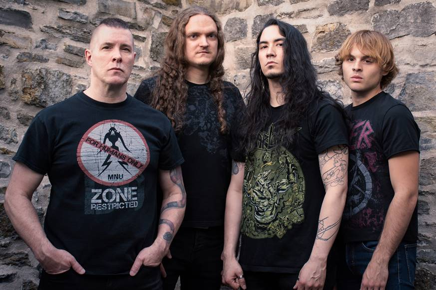 The album will be available in a Limited Edition Digipack with Lenticular cover, a jewel-case CD, a 12″ 180gms coloured vinyl in gatefold and digital download. Order now via http://hyperurl.co/ForTheDemented.

They say great (and often bad) things happen in threes, and ANNIHILATOR is proving the superstition on the eeriest day of the year! Combining heavy metal greatness with malevolent horror, the band is “thrilled” to reveal their extra-gory, NSFW music video for the track “Pieces of You” today.

“The following contains a graphic interpretation of a true crime story that includes potentially disturbing images and lyrical content,” says ANNIHILATOR‘s Jeff Waters. “We realize this is not exactly the most pleasant subject to write about, however, in the world of being a writer and musician, sometimes these stories can spawn a song! While many of the songs from the new album For The Demented have positive messages in them, this one does not!

Waters adds, “This is about a criminally insane guy who murdered his “annoying” girlfriend to “silence” her voice. He then eats pieces of her, as a means of keeping her alive inside of him. Ya, crazy, but when you watch horror movies, crime shows and own a few Cannibal Corpse t-shirts, this is tame in comparison.
I like the three dimensions of this: seeing the lyrics roll by: hearing/feeling the music and watching the horror… almost difficult to take it all in, in one view.
Enjoy “Pieces Of You”, if you can!”