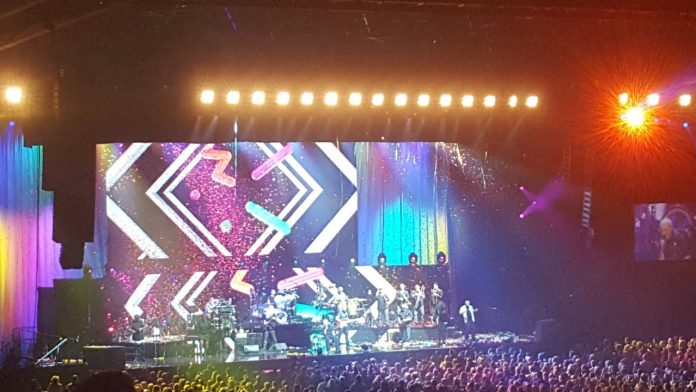 Phil Collins would like you to know that he’s not dead. Yet. And Keith is there to check the pulse

A little over three years ago I was here to see Peter Gabriel perform what was one of my gigs of the year and the careers of the two ex-Genesis singers/frontmen have taken very different paths. Whilst Gabriel has championed world music from the late 70’s onwards, been politically and environmentally active and as a consequence has been regarded as having the worthy canon of work, Collins back catalogue has always been regarded as disposable pop.

After a long retirement driven by ill health and well documented back problems (common to many drummers) he’s finally decided to have one last hurrah (because he missed us) calling this tour the ‘Not dead Yet’ tour and it rolls into Birmingham for the final night having started almost a year ago, so it’s now a very well-rehearsed and slick set.

Before he comes on stage the screens at the back show a tableau of him through the ages and act as a poignant reminder of what he once was as he slowly walks on stage with a stick and sit in a black swivel chair for the remains of the show. Opening with ‘Against All Odds’, the band is hidden by a black back drop which finally rises at the start of ‘Another day in Paradise’.

As he points out during the show, he’s written an awful lot of songs during a 40 year career so he’s not going to be able to play everyone’s favourite but rather than simply choosing the easy option of playing the greatest hits, he plays ‘Wake Up Call’ from the Testify album which he quips was bought by ten people including himself, a song that he’s never played live before.

‘Follow You, Follow Me’ gets the first big cheer of the night and during ‘I Missed Again’ we hear just how good his four man horn section is.  A twenty minute interval so that band and fans can have a pee separates the two one hour sets before we resume with a drum/percussion duet between his 16 year old son Nicholas (why isn’t he at school?) and Louis Conte. ‘I Don’t Care Anymore’ ramps up the pace as the second half does turn into a hit filled segment punctuated only by Phil sitting next to his son as Nicholas plays piano on the one song of his Dad’s that he likes: ‘You Know What I Mean’.

A long intro leads into ‘In The Air Tonight’ and there is a palpable holding of breath during the song as everyone waits to see if Nicholas can nail the iconic drum section, which of course he does and then we’re into his version of The Supremes ‘Can’t Hurry Love’ and if there’s anyone still sitting at this point then I can’t see them.

‘Invisible Touch’, ‘Easy Lover’ and an extended ‘Sussudio’ with a spectacular range of dazzling special effects splashed across the screens bring us to the close but also gives Darry Stuermer, who has now played alongside Collins since 1977, an opportunity to show what a talented guitarist he is.

A very short break and Collins is back with the band for the encore of ‘Take Me Home’ which has a real party feel as the show draws to a final close.

Is Phil Collins dead? Somewhat incapacitated, but on the basis of this show, definitely not dead yet.