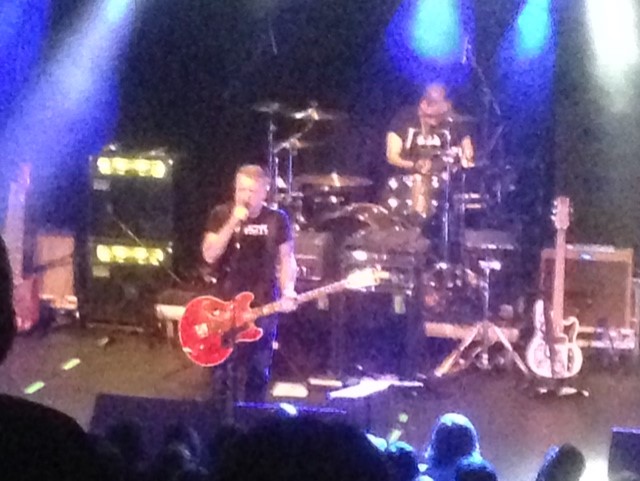 In the second of our Reviews as Peter Hook revisits his past, Phil checks out the Leamington gig and comes to a conclusion

Walking up the stairs the sounds of Blue Monday fills the staircase, passing through the side bar the songs drum beat breaks down and I enter the room to see Peter Hook on stage, his back to the audience facing his band in his signature low strapped bass stance rocking back and forth.

The first half definitely has its moments. It’s easy to see why New Order are considered as pioneers in electronic music by producers today. There are great sections of rolling bass, synths and drums. Peter’s guitarist (also main vocalist for this part of the show) seems to be giving his best Bernard Sumner impression. He rocks back and forth slowly as he sings much like Bernard, the occasional strained live vocal again like Bernard. All the time Peter Hook stands in the middle of the stage occasionally adding backing vocals and 4 bars of bass over his accompanying bass player of the Light.

The 1st half ends and the band leave the stage. When they return the tone of the music changes. Joy Divisions harder music sits well with the audience. Peter Hook now taking over main vocal duties does what the previous half’s singer did not do. He adds his own style to the vocal and shows the audience why he has been held with respect for so many years in the Manchester music Scene.

The highlight of the set is Digital, any members of the audience now doing their best Ian Curtis dance moves to the music, arms jagged and flailing.

The Set finishes with the classic song Love Will Tear Us Apart the audience singing along with every word. The evening ends with Peter Hook ripping his Marvel T shirt off tossing it into the crowd and leaving the stage topless.

It is easy to see why both bands were highly regarded in their time, the material speaks for itself. Tonight helped me to answer a question about who I would have liked to see more back in the day…Joy Division