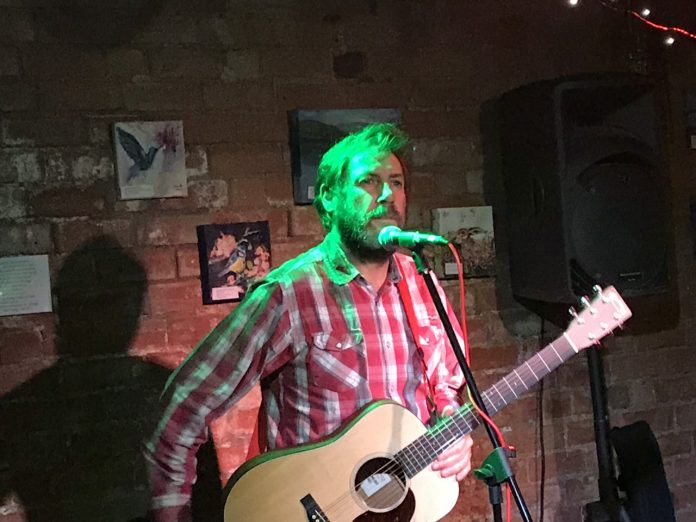 From Scandinavian Noir to The Smiths in 80 mins

In November 2016, around the time he released his latest album, “Nos Da Comrade”, there was an article in The Guardian about Peter Bruntnell. It started thus: “If we lived in a just world, Peter Bruntnell would by now be in the middle of his third or fourth global arena tour, his biggest worry working out how to courier his latest armful of Grammy awards back to the UK so his butler could have them installed in the west wing of  [his – sic] mansion by the time he got home.”

The article also mentions his self-effacing nature and argues that if he was a bit more in your face – corporate if you will, more people would have heard of him.

The irony of this is that MV finds itself in the Kitchen Garden Café, not because we know all of Bruntnell’s albums, but rather we hadn’t got a gig to go to this week and happened across his music (and that article) while looking for one.

The man himself is just more surprised that anyone is here at all: “So you’re missing Safe House for this…?” is his opening gambit. And it turns out barely anyone in here knows what that is either. It’ s a Scandinavian drama for those that are interested. He’s got it on catch-up, so away we go.

And that Guardian Article, you know, it’s not wrong. There is a rare articulate quality about these songs. Songs like “Just One Drink” about an alcoholic friend of his, a simply lovely “Here Come The Swells?” and “Have You seen That Girl Again?” that absolutely do deserve to be on bigger stages than this – although oddly, perhaps wouldn’t work as well if they were.

Because part of Bruntnell’s charm is that he is able to ask for requests. He does this on a number of occasions, with “Caroline” and “Close Of Winter” coming in the first bunch and “Jurassic Parking Lot” and “Sea Of Japan” coming in the second, and it is in “…Lot” where there is a real glimpse of the skill at work here. A song about town planning in Vancouver shouldn’t be good. This one most certainly is.

The new song he plays, “National Library” (“this one is for the Conservatives” is all he says on it), is excellent too and “Cold Water Swimmer” is darkly superb, a sort of British take on Americana if you will.

Bruntnell doesn’t look to be the type to enjoy encores, nonetheless there is one – after a fashion – “I’ll play you a couple more, but do you mind if I go to the toilet first?” isn’t something that gets said at a lot of gigs, but it is here, before “Long Way From Home” and The Smiths’ “Reel Around The Fountain” draw things to a close.

He’d noted earlier that “I’ll play a few more, one bloke and an acoustic can get a bit dull, can’t it?” And whilst he’s right, it’s never dull when it’s done well. Or when it’s done like this. Which you suspect that somewhere – deep down – Peter Bruntnell knows. He’s merely too modest to say it himself.