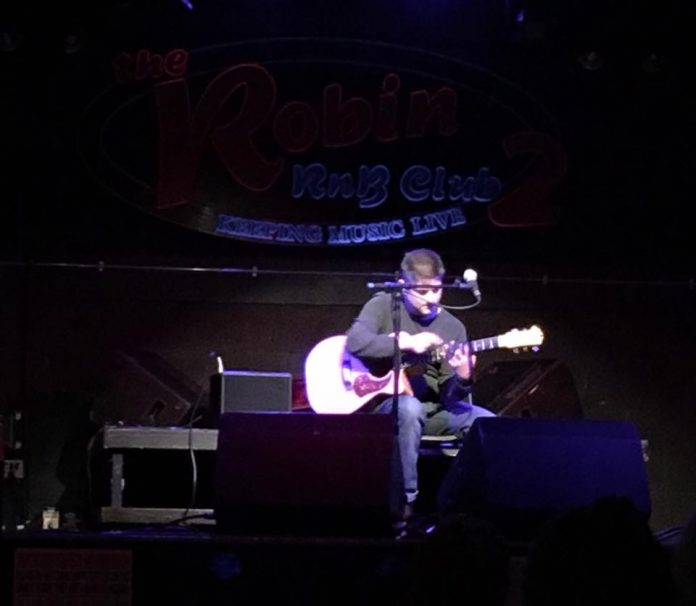 Garry makes one of his twice yearly trips

For a wet and windy Wednesday in February it was a good turn out at the Bilston Robin for the return of Pete Kent…..his six monthly appearances at one of the Midlands premier venues have been a staple favourite with many of his fans for a few years now and it’s encouraging to see that there are a few more unfamiliar faces at the gigs each time.
With two albums ‘Sands Of Time’ & ‘The Hidden Hand’ under his belt now it provides Pete with the opportunity to mix the setlist up a little and last night was a perfect example to show his talents off with original tracks, a few cover versions and some ‘mash up’ medleys…..this was probably the longest set I’ve witnessed from Pete and it showed how much he has grown as a live performer.
Pete claimed at the start of the gig that he felt a little rusty and asked us to bear with him if he dropped a note or two……I kind of feel he was hoodwinking us a little…….the evening was a fine example of finger style musicianship which once again had you wondering just how on earth he does that in certain parts of the tracks.
The original tracks such as ‘Postmans Knock’, ‘Summer Daze’, ‘The Spiral’ & ‘The Hidden Hand’ sit beautifully amongst covers such as Joe Satriani’s ‘Headless Horseman’, Carole Kings ‘It’s Too Late’ (my particular favourite) and current chart hit ‘Human’ from Rag ‘n Bone Man which was was pulled apart and then reassembled in Pete’s own inimitable style…..and of course the Medleys that have become a main part of the setlist……it all made for a very enjoyable evening.
Over the last few months Pete has signed an endorsement deal with Ibanez guitars who behind Fender & Gibson are one of the real major players in the guitar world…..this is the sort of endorsement which would send your confidence soaring…..and it certainly shows…..inbetween the tracks Pete seemed more at ease chatting to the audience than ever before, even recanting the tales behind the songs…..this is something that happens over time and it was a real pleasure watching Pete grow as an artist and a performer.
There is no doubt that being a professional musician these days is not an easy ride but with two albums recorded for Wolverhampton label ‘Revolver Records’ and an endorsement from Ibanez Guitars under his belt Pete is certainly moving in the right direction…..his next appearance at the Bilston Robin is in the summer…..I urge you to go and see one of his shows……because it will make you want to see him each time he plays.
My only criticism of the whole evening is aimed at certain members of the audience…..if you are going to go and watch an artist play live then please have the common decency to leave the inane conversations until the end of the show…..after all we have gone to see the performer on stage, not listen to how your day went!!!!
Garry Foster
Unchained: Tuesday’s 10pm-Midnight
Prog Rock Files: Thursday’s 10pm-Midnight
101.8WCR FM and online at 101.8 WCRfm » What’s On Air
Previous article
Dying For This?
Next article
Featured Band: Ecstatic Vision