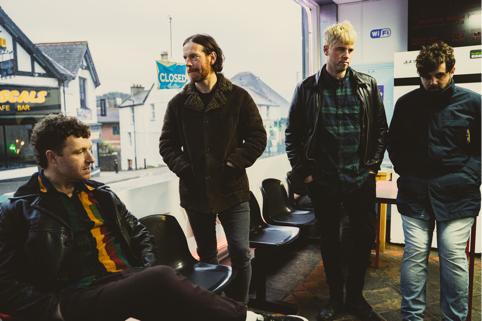 North Welsh four piece Bright Young People are proud to release their brand new single “Consequence Is Real” , the second of eight singles to be released in the next twelve months, all pressed into 7″ vinyl.

The epic and dramatic “Consequence Is Real“, was premiered on BBC 6 Music by Chris Hawkins on 3rd May and finds Bright Young People at their most anthemic; the song starts off with a moody dark vibe, as it builds with the harmonies the bridge leads into an uplifting melancholy chorus which hooks you in straight away and will refuse to let go.
Watch the video here: https://youtu.be/Hx92a5kc2CY

“Consequence Is Real” was recorded at Narcissus Studios and produced by Duncan Mills, who has previously worked with Catfish & The Bottlemen and Florence & The Machine.

“The song originally started off as a ‘swampy vibe’ song with a glam style beat until we decided to change to a more straight forward rhythm we wanted a more of a ‘crowd bouncer’ … we prefer it this way too” explains frontman Lee Dawson.
As a statement of intent, “Consequence Is Real” is fevered, intelligent and confident.  And, one can be sure, this is only the beginning for Bright Young People, the new faces of alt-rock.

Bright Young People are a band with something to say and the voice to back it up, channelling the inner frustrations that result from growing up in a rundown town into their music. With an abundance of live experience already under their collective belt, Bright Young People are set to take their new sound on the road early this year. With tour dates yet to be announced, additional releases on the horizon and support from both 6Music and BBC Introducing Wales, there appears to be no stopping them.
Consequence Is Real  is  available now all major streaming platforms https://lnk.to/ConsequenceIsReal