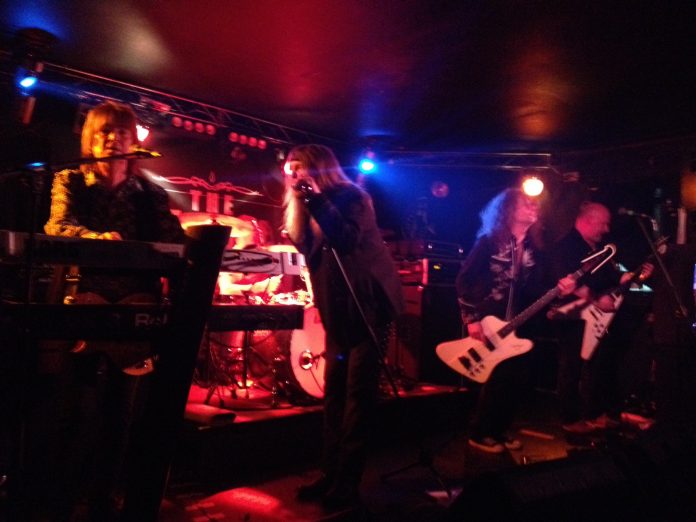 “I dunno about all that,” says Paul Raymond, grinning. “I think he’s been watching too many Bon Jovi videos.”

“He” in this case is Paul Raymond Project singer Andy Dodds, and what’s just happened is that he’s just gathered the band for a collective bow.

Raymond’s reaction, although funny, tells you much about the man. Let’s be blunt. He’s been around. Whether in his early days in bands like Chicken Shack, as a solo artist, or in outfits like Waysted and Michael Schenker Group, or his work in UFO, Raymond has had quite the career. It’s a long career too. This six date tour that he’s finishing tonight is to celebrate fifty years in the business. In short Paul Raymond knows what he’s doing. That he’s so reticent to milk the applause at the end is to his credit, his description of his life earlier in the set as “fifty years without a proper job,” even more so.

Nothing here deviates very far from sounding like UFO, (smilingly referred to as the “other lot” during the 90 minutes here) whether it is a cover of theirs or not. “Born And Raised On Rock n Roll” for example, does the job superbly and even if Dodds looks more like a younger Biff Byford than Phil Mogg, then it doesn’t really matter.

As that shows, there are plenty of PRP originals given a chance to shine, “Michael Caine” and “Burned Again” are particularly impressive. “Still The Same” which closes the set, and actually has a tune which is the same as the UFO track “Fight Night,” is perhaps best of all.

Of course, there are plenty of forays into that stellar back catalogue. “Love To Love” that most epic of epic power ballads shows up, but largely he stays away from the tried and tested, airing Watsted’s “All Belongs To You,” for example.

Only once does the main man take centre stage, to sing lead vocals on “Scream Blue Murder” preferring instead to do his thing in his own quiet, understated way.

He can’t even afford himself the luxury of an encore. The confines of The Asylum 2 mean there’s nowhere to go (“you’ll have to pretend,” he says) but he does give himself the chance to play the song that launched a thousand Maiden gigs in “Doctor Doctor.” There is another UFO song before the end too. “Natural Thing,” the opening song on “Strangers In The Night” is a perfect closer, because to all intents and purposes the whole concert has seemed like the most natural thing in the world all night.

With that it’s the “Bon Jovi” moment and time to say goodbye. Not that Raymond is about to sit and reflect on his career. There’s a tour with the “other lot” about to start.

It’s all go when you’ve been in rock n roll fifty years, it seems.