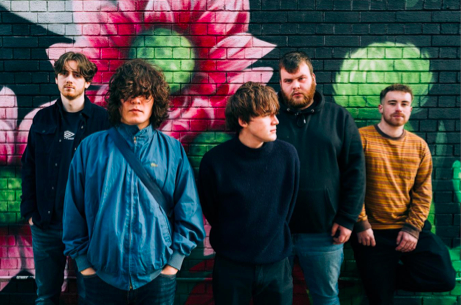 Pastel’s debut EP ‘Deeper Than Holy’ sparked a resurgence of the Madchester scene for a new generation when it was released late last year. It shot straight to #1 on the UK vinyl chart, having sold all 600 copies of its limited edition 12″ in just 90 seconds. Its title track was fired into the spotlight and charted on Shazam when used by Pretty Green to soundtrack their autumn/winter 2021 ad campaign, while further attention included support from BBC 6 Music, Radio X and Soccer AM.

Now Pastel will release their brand new single ‘Isaiah’ on May 13th. An emotive reflection of a tumultuous upbringing, the song arrives as they prepare to unleash their second EP this September on the Manchester indie label Spirit of Spike Island. Set to be premiered by Steve Lamacq on BBC 6 Music on May 12th, it comes as they get ready to play a similarly iconic show, supporting the legendary Liam Gallagher at Knebworth Park on June 3rd.

‘Isaiah’ encapsulates everything that Pastel excel at as they blend hazy shoegaze ambience with sonorous strings, shimming touches of John Squire’s intricate yet free-flowing guitar work and hints of The Verve’s aptitude for transcendence. It demonstrates that Pastel have the ambition to push their anthemic core sound into a far more expansive realm, further highlighting both the scope of their sound and their immense potential.

Pastel duo, cousins Jack (lead vocals) and James Yates (rhythm guitar), commented, “We had pretty tough childhoods, surrounded by drug addiction. Sadness, madness and badness. ‘Isaiah’ wasn’t actually written with any of that in mind, but our feelings seem to have soaked through us into the song subconsciously. Sometimes when you’re deep in hard times you become numb to it all. ‘I can feel nothing more, in this life that I’ve suffered for.’ But this tune is not about wallowing in self-pity. It’s about using our experiences as motivation; having some hope and self-belief!”

Completed by Joe Anderson (lead guitar), Liam O’Shea (bass) and Rhys Wheeler (drums), Pastel recorded ‘Isaiah’ with producer J. Fender(frontman of Afflecks Palace and founder of the Spirit of Spike Island label). It was mixed by James Kenosha and then mastered by John Davis (The Killers, Foals, IDLES) at Metropolis in London.

Sharing varied influences spanning Shack, The Verve, Radiohead, The Charlatans, Blossoms, New Order and Ride, the band’s reputation flourished with each release, culminating in the success of ‘Deeper Than Holy’. Their creative collaborators have already included the filmmaker Charlie Lightening (Liam Gallagher, Kasabian, Louis Tomlinson) and their label-mate Vega Rally.

Pastel will build up to the Liam Gallagher event with two intimate shows in Manchester (which sold out over a month in advance) and Stockton. In July, they tour as guests to Afflecks Palace, while August includes a headline set at the Leeds leg of the Rewired Festival and then The Boof Festival on a bill topped by Miles Kane. The dates are: