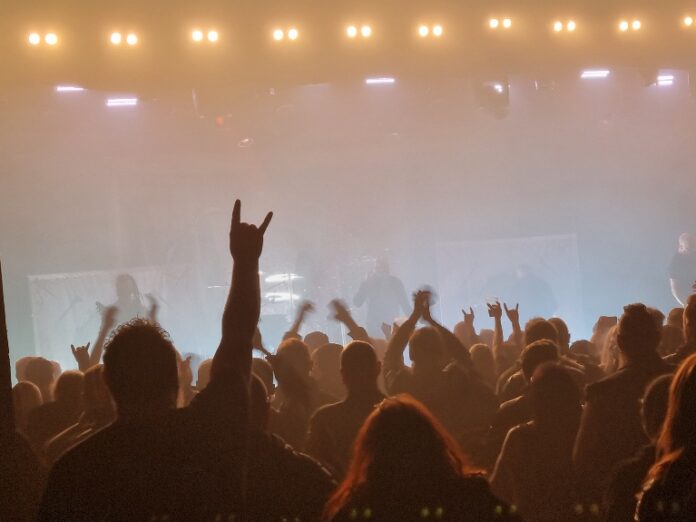 Moonspell, as Fernando Ribeiro has realised, is amongst friends: “There’s enough of my countrymen playing football in your city to make this home,” he smiles – and he smiles more than you think. That all being said, Ribeiro and his mates haven’t come from Portugal to talk about Match Of The Day. Nope, they are here to celebrate 30 years of gothic metal. And goodness me, they do it incredibly. Leather clad and almost mystical, they are both crushingly heavy and yet mellifluous all at once, which means slabs – and that seems a reasonable word for them – of music like the gut punch of an opener “The Greater Good” are dark, but incredibly entertaining. Moonspell understand a chorus, too, given the fact that “Opium” is positively bouncing, and “Extinct” has a fists in the air thing that would even please Saxon and the likes. The five piece have a history with these shores, and they’ve recorded their album “Hermitage” amongst others here, which perhaps gives the title track an extra thump. Their 45 minutes is genuinely thrilling, and it appears that Ribeiro has made an early, rock star-ish, exit when he disappears in “Full Moon Madness”, but no, he merely returns with a couple of drumsticks to add extra-percussion. Not necessarily the end you expected, and not necessarily the set you imagined either. It seems odd to say that a band who has been around for 30 years has gone under the radar, but Moonspell maybe have to a certain extent. They were fantastic here, though.

Paradise Lost are almost outliers in the UK.

At this point they pretty much do what they please, and even more, for the over 30 years that they’ve been on this planet, four of their members have been exactly the same.

Watching them tonight – and make no mistake there is a very healthy crowd in at KK’s – it strikes you that you are watching a unique outfit.

I have been a fan since their “Draconian Times” record came out (if I recall there was a sampler on Raw Magazine?)  and it was only after that I learned of their death metal beginnings. They play “The Last Time” from the album here.

Fast forward 27 years and there aren’t many bands that are as heavy again, having come full circle almost. A lot of that “new album” (“a lot has happened since, but its still the new album”, points out frontman Nick Holmes) is played here and the band are rightly proud of it. And, ever eager to keep moving forward, it seems, tracks like “Fall From Grace” and “Serenity” belong in their top echelons.

There are two other things too. First, PL understand their legacy and they understand that their fanbase is mostly of a certain age, and mostly blokes clad in black t-shirts, and they want to hear some of the stuff they grew up with, which is why “Widow” opens the set, and why “Eternal” is there too.

Second, though, is another point. There’s a couple of Paradise Lost albums that never got their due because they weren’t “proper metal”. They are, amongst my favourites, and hearing “So Much Is Lost” from “Host” and the title track of “One Second” makes you realise just how good Paradise Lost always have been.

There’s a sort of devil may care attitude about them too. Holmes is acutely aware of the bleakness of the work “this one’s fun,” he says, “its called “As I Die”. It’s a brilliant song too, and listening to it, you get the sense of the chemistry between Holmes and his right hand man Gregor McKintosh, who kicks out lead guitar that veers between crushing heaviness and something akin to Sisters Of Mercy.

The last pair of the main set explain the band. “No Hope In Sight” is as heavy as a concrete block, but “Say Just Words” – and if I am ever on desert island discs then so is this – is nearly a pop song by comparison.

The lengthy encore builds beautifully with “Darker Thoughts”, takes in the aforementioned “….Lost”, “Beneath Broken Earth” is nearly death metal despite coming out in the last decade and “Ghosts” is from the newest album as if to tell you that this is their past and also their future.

The weather tonight in Wolverhampton is wet, cold, grey and stunningly bleak. Somehow you couldn’t pick a better metaphor for the music here. And you absolutely wouldn’t want Paradise Lost any other way.