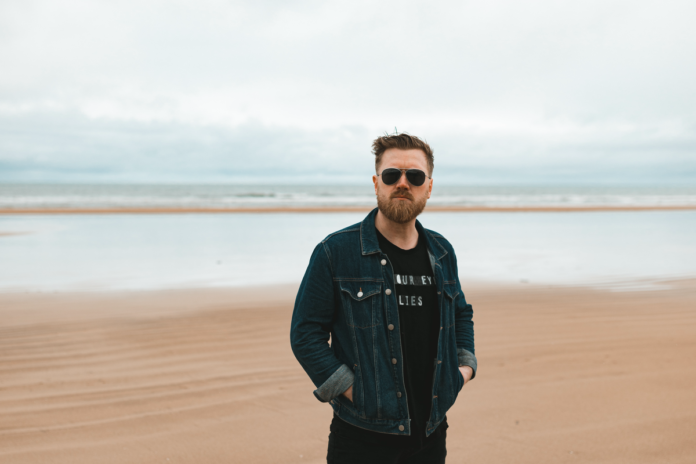 As the video for his new single, ‘My Kind of Paradise’, commences, Northern Irish singer, songwriter and producer Gareth Dunlop is sitting in darkness, far away from anything resembling a heavenly oasis – and that’s fine with him. “Don’t need sun on my skin / Or salt on the breeze / To calm the storms within / Or set my soul at ease,” he sings. “‘Cause I’ve found heaven / In your eyes / My kind of paradise.” A perfect love song to signal the onset of summer, albeit without an appropriate sunny locale, ‘paradise’ is at least subsequently built around him.

“How this video started out and ended up are two very different tales,” Dunlop laughs. “My original idea was to shoot a lyric video on the north coast of Ireland using lots of clever props my wife had made. We drove up to the location, but all hell broke loose when a storm began as soon as we arrived. Cars got stuck in the sand, props got soaked and ruined, signs blew away…in the end, we were beaten by the good old Irish weather.”

Thankfully, his director and videographer Jamie Neish had a Plan B. “His idea was to shoot a one-take and have a fake beach scene built around me,” he continues. “Jamie is one of those people in life who exudes positivity! When he’s excited about an idea, it’s infectious. We called two buddies to act as the builders on the set, re-used what was left of the props, bought some bags of sand and just went for it.”

‘My Kind Of Paradise’ is the latest single from Dunlop’s just released new album, ‘Animal’, which consists of a diverse set of songs including the soulful and anthemic ‘Right About Ready’ and ‘Look Back Smiling’ (which evoke the ’80s yet exude a timeless quality), the atmospheric ‘Sorrow’ and ‘Prisoner Of My Past’, the laid-back ’60s dream pop vibe of ‘Humans’, plus a memorable title song that adds an electronic bounce to its subtle groove.

‘Animal’ was recorded in Dunlop’s own Sycamore Studios as lockdown engulfed the globe, a period that also saw him produce records by his friends and compatriots Foy Vance and Lee Rogers. All three are about to hit the road for a US tour, with Dunlop on double duty as part of Vance’s band. A previously announced UK and Ireland tour is scheduled for the late summer.